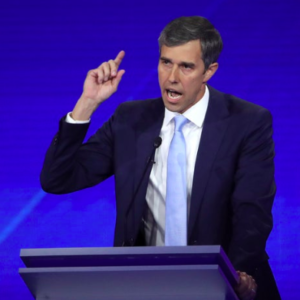 While the post-debate buzz focused on former HUD Secretary Julian Castro’s aggressive attacks on former Vice President Joe Biden, the lingering impact on the electorate from Thursday night’s debate is likely to be policy, not personal politics.

From mandatory gun confiscation to freeing criminals from prison to ending all private health insurance, Democrats doubled-down on progressive — perhaps even extreme — policy positions that would have been viewed as beyond the political pale just two years ago.

Former Texas Rep. Beto O’Rourke used the recent mass shooting in his hometown of El Paso to make an unapologetic call for gun confiscation, answering the question with a “Hell, yes!”

“Some on this stage have suggested a voluntary buy-back for guns in this country. You’ve gone further,” ABC’s David Muir said to O’Rourke. “You’ve said, quote, ‘Americans who own AR-15s and AK-47s will have to sell them to the government, all of them.’ You know that critics call this confiscation. Are you proposing taking away their guns?”

“I am, if it’s a weapon that was designed to kill people on a battlefield,” O’Rourke answered. “Hell, yes, we’re going to take your AR-15, your AK-47. We’re not going to allow it to be used against our fellow Americans anymore.”

Sen. Cory Booker also supports gun confiscation, along with mandatory federal licenses for anyone who wants to buy a gun. “I was the first person to come out for gun licensing. And I’m happy that people like Beto O’Rourke are showing such courage now and coming forward and also now supporting licensing.

“Nobody has ascended to the White House that will bring more personal passion on this issue. I will…bring a fight to the NRA and the corporate gun lobby like they have never seen before,” Booker said.

Even Joe Biden, who has been careful to maintain a more moderate line, endorsed gun buyback programs.

“Over 90 percent of the American people think we have to get assault weapons off the street — period. And we have to get buy-backs and get them out of their [gun owner’s] basements,” Biden said.

Polls consistently show most Americans oppose gun confiscation, but if any Democrats on the stage felt the same, they kept it to themselves.

There was a similar dynamic on criminal justice reform and reducing prison populations, exemplified by Biden’s statement that “nobody should be in jail for a non-violent crime.”  Releasing all non-violent offenders would mean letting Ponzi schemer Bernie Madoff and Donald Trump’s former campaign manager Paul Manafort out of prison.

“We’re in a situation now where there are so many people who are in jail and shouldn’t be in jail,” Biden said. “The model has to change. Nobody should be in jail for a nonviolent crime.”

This may sound extreme, but it fits with the criminal justice reforms proposed by many of his competitors. Sen. Elizabeth Warren, who has called America’s criminal justice system “racist from front to back,” wants more criminals released from prison early. Her fellow progressive Bernie Sanders has spent a career fighting against tough-on-crime legislation, and he supports ending the death penalty and giving incarcerated felons the right to vote.

And Sen. Booker has proposed the Reverse Mass Incarceration Act that would hand out money to states for reducing their incarceration rates by 7 percent over a three-year period, but without increasing their crime rates by more than 3 percent. Offering to spend tax dollars for a policy that legislators acknowledge is likely to increase crime puts Democrats like Booker out on the edge of the criminal justice debate.

The one issue where progressive policy inspired some pushback on the debate stage was healthcare.  Sens. Sanders and Warren support a single-payer Medicare For All system without apology or moderation, despite the estimated $3 trillion a year pricetag. When Biden called him out on it, Sanders responded:

“Joe said that Medicare for All would cost over $30 trillion. But the status quo over 10 years will be $50 trillion,” Sanders claimed. “Every study done shows that Medicare for All is the most cost-effective approach to providing health care to every man, woman, and child in this country. I, who wrote the damn bill, if I may say so, intend to eliminate all out-of-pocket expenses, all deductibles, all co-payments.”

To which Minnesota Sen. Amy Klobuchar responded: “While Bernie wrote the bill, I read the bill. And on page eight of the bill, it says that we will no longer have private insurance as we know it. And that means that 149 million Americans will no longer be able to have their current insurance.

The ten Democrats were divided on how far to go with Medicare For All, but they were all in agreement on spending billions–or trillions–more on healthcare.

They were also united in their constant criticism of President Trump, but even there they risked alienating moderate voters with their extreme attacks.  O’Rourke blamed President Trump for the mass shooting in El Paso, for example, while Sen. Kamala Harris said that “obviously, he didn’t pull the trigger, but he’s certainly been tweeting out the ammunition.”

And Mayor Pete Buttigieg went so far as to accuse all of Trump’s supporters of embracing racism.

When moderator Jorge Ramos asked, “Do you think that people who support President Trump and his immigration policies are racist?”

“Anyone who supports this is supporting racism,” Buttigieg answered.