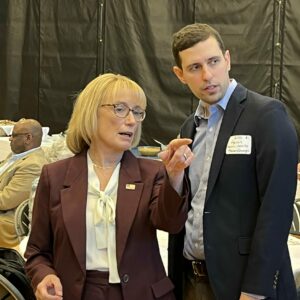 Sen. Maggie Hassan talks to a staffer at a candidate forum hosted by the Nashua Chamber of Commerce on October 12, 2022.
[IS] Opinions

I can’t believe what I’m seeing in New Hampshire politics.

The Nashua Chamber of Commerce is a respected organization. It had a debate scheduled Wednesday for a pretty important race in New Hampshire — the U.S. Senate seat.

And by the way, that seat does not belong to any one person. It belongs to the voters. It belongs to you and me. It is the people’s seat. So, whenever they talk about a senator spending tens of millions of dollars to hold on to his or her seat — it is not their seat.

Anyway, they had a debate scheduled between Sen. Maggie Hassan and her opponent, Gen. Don Bolduc. But according to multiple media reports, Sen. Hassan’s campaign told the Chamber it wanted to break the format and change it, that she would not stand with Bolduc on the stage.

So, this is what they do: The two candidates both show up and when they’re ready to ask the senator a set of questions, they ask her Republican challenger to leave the area — leave the room — while they ask their questions. Then she will leave the building and Bolduc will come up and answer questions.

That’s not a debate. That’s like trying to have a boxing match and telling one person to go into the ring while the other person stays in the locker room. I don’t get it.

In all due respect, this isn’t the same Sen. Maggie Hassan that I knew when she was governor, or first became a senator. Or first-term senator.

And I think back to the debates I moderated when she ran for governor and then the U.S. Senate. The debate in my studio between Maggie Hassan and Sen. Kelly Ayotte is somewhat famous, in fact.

The point is, we had debates. It’s not that debates necessarily change anything, it’s the New Hampshire tradition. What’s wrong with that?

Today, it seems — in my opinion — Sen. Maggie Hassan has lost her New Hampshire way. Based on what I’m observing now, this isn’t the same Sen. or Gov. Hassan I knew. That Hassan would be debating her opponents in all sorts of media outlets.

And here’s my question: The New Hampshire Democrats running for re-election to Congress have gotten the exact slate of Republican opponents they wished for. The opponents that out-of-state groups spent millions to make sure they would get. Democrats dreamed of running against Don Bolduc, Karoline Leavitt, and Bob Burns.

So, why are they running and hiding? I don’t get it.

What really bothers me is I know these people and they’re better than this. Chris Pappas is from New Hampshire. He grew up in Manchester. Do you know how many politicians have come through the Puritan Backroom? He knows better than this.

And I dare say Maggie Hassan — at least the Maggie Hassan I knew and respect — she knows better than this, too. What they’re doing is they’re selling out to the big money from Washington. The big consultants who come in and tell them, “Oh, you don’t have to go to the Nashua Chamber of Commerce event and debate. Just tell them, ‘Do you know who I am?'”

What’s regrettable about this is that we have good people in this state who put their names on ballots. It’s a very thankless environment to be in. So, why make it worse? Why make it more toxic like all the other crappy states?

Why ruin a good thing In New Hampshire? We’ve been home to the First of the Nation presidential primary for decades. Who wants to take that away, by the way; ask yourself that. Who wants to get rid of our “press the flesh, go to the diner, meet the candidates five times, answer the voters’ questions” primary?

Why the hell would you want to take that away?

Well, the National Democratic Party wants to. They want to make the entire process more like New York and California — why would we want that?

What I’m seeing now, for the first time in my life, are candidates who want to campaign like they’re not from New Hampshire. It’s like they’re full-time Washington, D.C. multimillionaire politicians all of a sudden.

And that’s not New Hampshire.