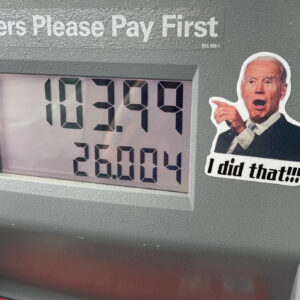 HEATH: Biden Will Kiss the Saudi Ring Rather than Meet With U.S. Oil Producers

From a political standpoint, the issue of gas prices is different. It just is.

Issues like abortion or the baby formula crisis are important. But when gas prices go to $5 a gallon and head toward $6 a gallon, it impacts every one of us, directly or indirectly. It doesn’t matter what kind of vehicle you drive or how much driving you do, because gas prices make inflation worse.

And when you go to pay, and you don’t have enough money to put gas in your vehicle to drive the kids around or go grocery shopping, it makes everything worse. But Washington just doesn’t get it.

If that’s the case, if the Big Oil companies really do have the power to solve this problem, why isn’t this White House sitting down with them? Even if they don’t like the oil companies politically, why don’t they sit down and say, ‘We need more oil and gas, we need more production, what can we do to get it done?”

Instead, the Biden administration is going to crawl to Saudi Arabia to beg them to produce more oil for us. I have to say, having the president go to the Saudis is probably not in our best national security interest.

In fact, I’ll go a step further. It’s un-American. I’m embarrassed that the President of these United States is going to Saudi Arabia to kiss the ring of the kingdom so we can get more oil.

I’m not saying we haven’t taken their oil b before. I’m not saying it’s not part of the mix. I’m saying the same president of the United States could spend less money on Air Force One and, instead of the Middle East, he could go to Western Pennsylvania or Colorado or North Dakota and speak with the CEOs of the companies that produce oil and gas here.

Why isn’t the White House doing that? It’s a simple question: ‘Mr. President, why don’t you go to the producers of the oil and gas here in America to get more production? Why are you going over to Saudi Arabia to kiss the ring?’ And I’d like an honest answer.

And since he hasn’t provided one, I’ve got my own answer: It’s because members of his own White House, like his climate czar John Kerry, have him tied up. They’ve cut a deal with the extreme progressives in his own party, and now American consumers are getting screwed over politics. And the politics of this White House are basically that the oil and gas producers of America are the enemy. And we don’t want any of their products anymore.

President Biden can act like they’re the enemy, but for consumers paying these high gas prices, they could be our friends.

And the fact that he won’t go to them, but he will go to Saudi Arabia — and that nobody in the national media will ask him about it — is a blanking shame.

It’s an insult to my intelligence, and I assume to yours, too.