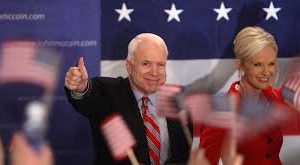 “He Was a Force of Nature:” John McCain on the New Hampshire Campaign Trail

Jennifer Horn is a longtime Republican activist who ran for Congress and served two terms as chairman of the New Hampshire GOP. She shares her thoughts on the passing of Sen. John McCain with NHJournal:

During my time working in local media I had the opportunity to interview John McCain at least twice: As Chairman of the party I was honored to welcome him to NH when he was in town campaigning for Lindsey Graham in 2016; and as our party’s congressional nominee in NH-02 in 2008, I was honored to be on the ballot with John McCain.

Throughout 2007, I interviewed most of the GOP candidates as part of a ‘Tea with the Candidates’ series, trying to give our readers a sense of who these folks were outside of the political arena.  John McCain broke all stereotypes of him as a gruff, tough politician and revealed the tenderness he felt for his family.  He spoke sweetly about his mother, proudly about his children and lovingly about his wife, Cindy.  The interview went longer than scheduled as he told stories about his childhood, his travels and was, quite simply, delightful–a word, I am certain, would make him laugh out loud hearing it applied to him.

In 2008, during the general election, I spent some time stumping with the then-presidential nominee.  Campaigning with McCain was an education.  He wasn’t your typical politician, shaking a thousand hands and moving on.  He held on to your hand, looked you in the eye, and listened.  As a novice candidate, watching McCain taught me the importance of understanding that elections are not about candidates, but about the voters.  He was brilliant when it came to connecting with voters, responding with warmth and humor, leaving a personal mark on each individual he met.   He was smart, passionate and funny.  Being the warm-up act at a McCain rally was not an enviable position to be in.

His independent nature made him a favorite son in the Live Free or Die state.  He was a force of nature, able to campaign with twice the vigor of candidates half his age.  He won the First in the Nation primary during each of his campaigns for President because he understood our spirit, and embraced our independent nature. 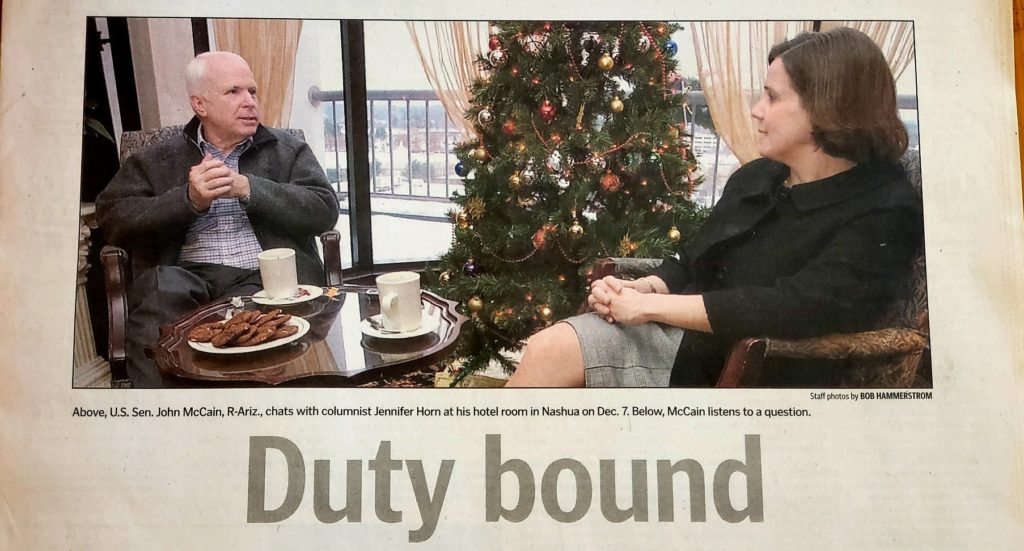 In 2016, he returned to New Hampshire to campaign on behalf of his friend, Sen. Lindsay Graham, and we discussed the state of politics at the time.  More than once during the primary I spoke out when I believed that another candidate, our current president, made statements that were deeply in opposition to the core principles of the Republican Party, and as a result, faced some backlash.

McCain told me not to worry about the criticism, and not to stop speaking out in defense of what was right.  It’s not always easy, he told me, but sometimes, “people need a little straight talk,” he said.

His encouragement and support was an invaluable reminder that we must never abandon the fight for what we know is right.  It is that willingness to fight for human liberty and the values upon which our country was founded, that defines who we are as Americans, and no one understood that better, or lived it more personally, than John McCain.

Freedom was not just an idea to John McCain, but a tangible thing that was worth fighting and dying for.  American greatness was not just a principle to him.  He believed with everything in him that our nation was a land of extraordinary opportunity and that his country made him great, not the other way around.

John McCain was an American hero, the likes of which is rarely seen outside of the movies.  His passing is an American heartbreak, a loss from which our nation will not soon recover.  One can only hope that someone, somewhere, will pick up the mantle of the Maverick, the straight talk, and the integrity, honor and service that is John McCain’s legacy.

For me, that I had the profound privilege of standing with John McCain as we fought a battle for what we believed was right, even for a brief time, will forever be one of the great honors of my life.