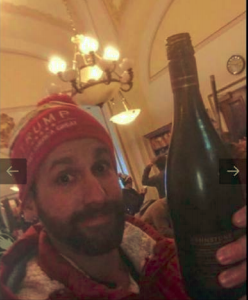 He Thought Kuster Was a State Rep, But Capitol Hill Rioter Says He’s Running Against Her Anyway

Supporters of U.S Rep. Annie Kuster were no doubt surprised to learn she was facing a challenge for her Second District congressional seat from a January 6 Capitol Hill rioter. But they weren’t nearly as surprised as he was.

Riddle, 32, was arrested in February on charges of knowingly entering or remaining in any restricted building or grounds without lawful authority, theft of government property, and violent entry and disorderly conduct on capitol grounds. He has admitted participating in the riots that overran the U.S. Capitol, and stealing a bottle of wine and a book in the process.

When a judge released Riddle in advance of his trial, he was ordered to stay away from drugs and alcohol and undertake mental health treatment. He has since been ordered not to enter the District of Columbia while his charges are pending — a potential problem for someone hoping to serve in Congress.

“Despite my ongoing legal problems, I’m supposed to live my life the way I want, and I want to do this, so why not?” Riddle told NBC.

In other words, not a candidate who would traditionally be taken seriously. But that didn’t stop Kuster from sounding the alarm — and sticking out her hand.

“A far-right extremist who stormed the Capitol during the January 6th insurrection is running for Congress against Annie,” the email reads. “We need to get 200 Rapid Response Donations TODAY in response to this news. This man does not represent the Granite State and would be a threat to our Democracy.”

First elected in 2012, Kuster has handily won re-election every year except 2016, when she eked out a 4-point win over Republican Jim Lawrence.

Her political fortunes are likely to improve even more in 2022 when the GOP-control state government is expected to re-draw the state’s two congressional districts to create a solidly Republican First District, leaving Kuster’s Second District even bluer.

Still, Riddle says, he’s in the race and he doesn’t think his background as a Capitol Hill rioter will hurt him.

“It tells them I show up,” Riddle said Sunday. “I’m going to actually keep my promises and make some changes.”