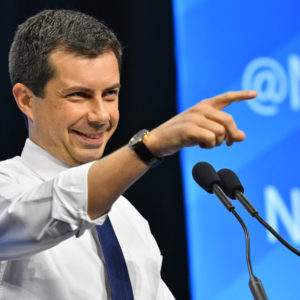 Have New Hampshire Dems Made Their ‘Butti-Call?’

In February, Pete Buttigieg was an unknown mayor of a midwestern town with a smaller population than Manchester, NH– an openly-gay political newcomer with an unpronounceable name and one percent support in the polls.

Today he’s beating some of the biggest names in American politics–including his own party’s previous vice president– in both Iowa and New Hampshire. And he’s ahead of the Democrats’ two biggest celebrity senators in their own New England back yard.

Is Mayor Pete really the candidate to beat in the 2020 presidential primary?

A new poll released by the Saint Anselm College Survey Center shows Buttigieg with 25 percent of the Democratic primary vote in the Granite State, 10 points ahead of both Joe Biden and Warren. These findings follow three recent polls with the Indiana pol either tied or leading in Iowa as well.

“It seems as though Mayor Pete is picking up some of the voters who are dropping off from the two people who led throughout the summer,” says Neil Levesque, director of the New Hampshire Institute of Politics at St. Anselm College.

Levesque says the big news is the size of the Buttigieg surge. He’s up an impressive 15 points since September in the St. Anselm poll, and he’s jumped 14 points between August and November in Monmouth’s latest Iowa polling.  Meanwhile, his closest competitors are all heading the wrong way: Sanders down by 2 points, Warren down 9, and Biden down 10 in the New Hampshire poll.

Political pundits point out Mayor Pete has yet to make any progress with black or Hispanic voters, a significant part of the Democratic primary electorate. “Nobody is going to win our party’s nomination without representative support from African-Amerian voters,” DC-based Democratic strategist Joel Payne tells NHJournal.

In South Carolina, polls show Pete with zero support—literally–among African-American Democrats in that key, early state. Benenson Strategy Group conducted focus groups for the Buttigieg campaign among black voters in South Carolina and reported: “Being gay was a barrier for these voters, particularly for the men who seemed deeply uncomfortable even discussing it.”

At the same time, black voters aren’t supporting the candidates of color currently in the field. Both Senators Cory Booker and Kamala Harris continue to poll in the single digits among black Democrats. Gov. Deval Patrick’s decision to enter the race is widely viewed as a determination that these voters, who are largely backing Biden, are open to more options. However, Morning Consult reports in their new poll, Patrick has zero support among any Democratic primary voters, nearly half of whom say they’ve never heard of him.

All of which supports the Buttigieg campaign’s theory that, if he can win surprising victories in Iowa and New Hampshire, he’ll get another look from voters of color in Nevada and South Carolina.  Mayor Pete doesn’t need a majority of their votes. He just needs enough of them to join his white, affluent, college-educated suburban base of support in South Carolina to send him on to the more friendly environs of California, Colorado and Virginia on Super Tuesday.

Longtime New Hampshire Democratic strategists tell NHJournal that fresh-face, first-time candidates shooting to the top of the polls early in the Democratic primary is nothing new.  They point to Vermont Gov. Howard Dean in 2004 and, on the other side of the aisle, Minnesota Rep. Michelle Bachmann and businessman Herman Cain in 2012.

For establishment Democrats in DC, the current question about Buttigieg is whether he fits the profile of a presidential candidate. “Democrats are starting to take a measure of Mayor Pete as their potential nominee,” Payne says. “And they see some challenges: He’s not a nationally-known Democratic brand, his political resume is thin, and yes, his youth is probably a factor, too.

“Look, 37 is five years younger than any previous president. If he’s the nominee, he’ll be standing across the stage from President Trump. So ‘does Pete look presidential?’ is going to be an issue.

“At the same time, the Democrats who’ve won the White House going back to JFK have represented change–usually generational change: Carter, Clinton and Obama. And in that sense, Mayor Pete might be the strongest candidate in the field.”