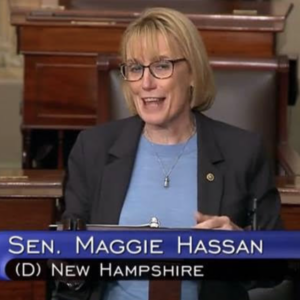 Sen. Maggie Hassan, an outspoken advocate for “getting big money out of politics,” has taken more campaign cash from lobbyists than any other rank-and-file member of Congress, according to data at OpenSecrets.org.

Hassan has collected more than $436,000 from lobbyists this cycle who represent industries ranging from Big Tech (Google) to Big Pharma (AstraZeneca) to Wall Street (Blackstone Group).

Hassan also took more than $77,000 from corporate lobbyists, among them representatives for a Chinese company the FCC’s Public Safety and Homeland Security Bureau formally designated “a national security threat,” according to a 2020 statement from the agency.

And despite her rhetoric targeting “Big Oil,” Hassan has accepted $16,750 from lobbyists for Exxon Mobil, BP, and Shell.

As a result, Hassan is number three on OpenSecrets’ “Top Recipients of Contributions from Lobbyists, 2022 Cycle,” trailing only Senate Majority Leader Chuck Schumer (D-N.Y.) and House GOP Leader Kevin McCarthy, both members of leadership who receive campaign cash thanks in part to their positions in the caucus.

No other rank-and-file member got as much lobbyist money as Hassan, who leads the next name on the list, Sen. Catherine Cortez-Masto (D-Nev.), by about $60,000. Hassan has also taken $2.4 million from Political Action Committees (PACs), many representing Wall Street, Big Tech, and far-left groups like the Progressive Turnout Project.

Hassan’s big-dollar donations stand in stark contrast to her anti-corporate-dollar rhetoric. “From prescription costs to reproductive rights, the solutions to our pressing issues all rely on getting big money out of politics and protecting voting rights,” Hassan said via Twitter. “I’m honored to earn an A rating from End Citizens United, and I’ll keep working to ensure a government of, by & for the people.”

The End Citizens United group posted an ad for Hassan reading: “‘We, the People,’ not We, the Wealthy.”

And on Friday, Hassan will be campaigning at the University of New Hampshire with Sen. Elizabeth Warren, one of the most outspoken opponents of corporate campaign funding. “In my campaign, I’ve pledged not to take money from federal lobbyists or PACs of any kind,” Warren said when she ran for president in 2020. “I’m not doing call time with rich donors or giving special access to rich people in exchange for contributions to my campaign.”

Hassan declined to respond to requests for comment, as she has consistently done throughout the 2022 campaign.

Hassan has far outraised her Republican opponent, Gen. Don Bolduc, whose largest individual contribution was $13,540 from New England Die Cutting, according to OpenSecrets. Like Hassan, Bolduc’s campaign has received millions of dollars of support from outside organizations — including $3.5 million spent by Schumer’s PAC to promote him in the GOP primary.

“Career politician Maggie Hassan is nothing more than a hypocrite, taking money from the very corporations she claims to be fighting against while on the campaign trail,” said Bolduc spokeswoman Kate Constantini. “It seems as long as her campaign coffers stay full, she’ll do and say whatever it takes to get reelected. New Hampshire needs someone representing them in Washington who isn’t bought and paid for by special interests.

“In the Senate, Gen. Bolduc will always put the needs of Granite Staters first.”