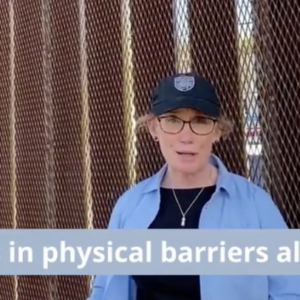 Sen. Maggie Hassan may sit on the Senate Homeland Security Committee, charged with overseeing U.S. border policy, but she remained mum as word came unauthorized border crossings hit a new one-year record — more than 2 million — and there’s still another month remaining in the current fiscal year, which is how crossings are tabulated.

Since entering the U.S. Senate, Hassan has repeatedly voted against funding the border wall President Donald Trump tried to build while he was in office, And she opposes deporting illegal immigrants who successfully make their way into the nation, also known as “interior enforcement.” She also opposed the “remain in Mexico” policy that drastically reduced illegal crossings during the Trump administration, and she voted against funding to maintain the Title 42 policy that has prevented hundreds of thousands of would-be migrants from entering the U.S. to seek asylum.

But when the political winds appeared to have shifted against her as the November election approached, Hassan suddenly reversed her positions. Today she says she supports the Title 42 policy, and she even traveled to the Trump border wall in Arizona to record a campaign video talking up her newfound support for “more physical barriers.”

Hassan has declined to respond to dozens of requests for comment from members of the New Hampshire Press Association on her border policy and voting record on the Homeland Security Committee. She has also declined to say if she agrees with the Biden administration, including Vice President Kamala Harris, when it claims “the border is secure.”

Her GOP opponent retired Gen. Don Bolduc, however, is speaking out.

“Through their ‘border czar’ Kamala Harris, the Biden administration has declared the border ‘secure.’  If only that were the case,” the Bolduc campaign said in a statement. “Sen. Hassan’s unwillingness to speak the truth or stand up to her own political party makes her complicit in this mess, and Americans everywhere are paying the price.”

In the First Congressional District, Rep. Chris Pappas also has a record of voting against border walls, and he voted to give COVID-19 relief checks to illegal immigrants. And, like Hassan, he reversed his stance and now says he supports more aggressive border enforcement.

“Chris Pappas supports Joe Biden’s policies 100 percent of the time, including his wide open border policy,” Leavitt told NHJournal. “Therefore, Chris Pappas is 100 percent responsible for the illegal invasion of our country and the unprecedented surge in fentanyl pouring into our state.

“While Chris Pappas remains silent during this crisis of lawlessness, I will continue to stand strong for law and order.”

According to Mark Krikorian at the Center for Immigration Studies, “Over their lifetimes, all the illegal immigrants Biden has so far added to the United States will cost us about $100 billion.”