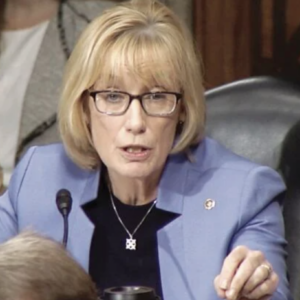 As the midterm election approaches, U.S. Sen. Maggie Hassan has yet again moved away from the political left on a hot-button issue, telling WMUR’s Adam Sexton she opposes the Biden administration’s newest border policy.

At issue is Title 42 authority, used by the Trump administration to turn away all migrants at the border in order to stop the spread of COVID-19. Instead of transporting undocumented migrants and asylum seekers to Customs and Border Patrol (CBP) processing centers, Border Patrol agents used the authority to process would-be immigrants in the field and immediately expel them from the U.S.

“The results were an instant success,” reports the Center for Immigration Studies (CIS), “with just 17,108 apprehensions in April 2020 (compared to 109,415 in April 2019) and monthly apprehensions remained low until the fall, when Biden’s electoral victory appeared to be a certainty.”

Now the Biden administration is preparing to revoke the policy. “After considering current public health conditions and an increased availability of tools to fight COVID-19 (such as highly effective vaccines and therapeutics), the Centers for Disease Control (CDC) director has determined that an order suspending the right to introduce migrants into the United States is no longer necessary,” said a CDC statement released on Friday.

After years of opposing border enforcement policies like the “Remain in Mexico” protocols imposed by the Trump administration, Hassan is now joining more moderate Democrats in the Senate who oppose the new Biden administration policy.

“We need to be pushing the administration more to really listen to the frontline personnel and make sure that we have in place the technology, the barriers, the personnel to really deal with what we are going to see surging at the border,” Hassan said Sunday. “Especially if they go ahead, against the recommendation of many of us and remove the Title 42 authority.”

The White House acknowledges the change is likely to lead to a surge of border crossing — on top of the record numbers since Biden took office.

The numbers are astonishing. “CBP has encountered close to 2.277 million aliens since February 2021, CIS reports. “Of that number, just over 1,246,600 (54.75 percent) have been expelled under the CDC’s orders; the remaining 1.03 million-plus were processed under the Immigration and Nationality Act (INA), and an untold number have been released into the United States.”

As a member of the Homeland Security Committee, Hassan has rejected calls to deport illegal immigrants caught inside the U.S. (known as “interior enforcement”), instead supporting a wide-ranging amnesty for people who have come to the U.S. illegally.

Hassan also voted against a bill to reinstate the “Remain in Mexico” policy Biden ended, which contributed to the current border crisis. The Biden administration has since been forced by the courts to re-implement the policy.

The first-term Democrat’s mention of the need for barriers is noteworthy.

In 2016, candidate Hassan opposed building a wall at the U.S.-Mexico border. In 2019, she said during a visit there that frontline agents wanted a wall and said a physical barrier in some places may be necessary.

But in 2020, she backed a bill to stop the Trump administration from funding border barrier construction and in 2021 voted against funding it again.

On Sunday her position was still unclear. Hassan said she is making a trip to the border next week and plans to inspect “spaces between ports of entry. What kind of technology, drones, sensors, cameras do we need to make sure we’re detecting people who are trying to cross unlawfully?”

Supporters of tougher border security respond that the Biden administration is already detecting illegal immigrants. It is just not building the fences to stop them or deporting them when they are caught later somewhere in the U.S. interior.

Multiple CBP sources told Fox News that more than 62,000 illegal immigrants evaded Border Patrol agents in March, and there have been more than 300,000 known “gotaways” — migrants who were not apprehended or turned themselves in and who got past agents — since October 1, 2021.

“For comparison, former Border Patrol Chief Rodney Scott said there had been approximately 400,000 gotaways in the entirety of FY 2021,” Fox reports.

A border wall could help prevent those illegal immigrants from entering, and interior enforcement could remove them after they have gotten into the country. Hassan opposes both — a fact her GOP opponents are going to highlight between now and November.