Democrats are already rolling out issues this week, like high drug prices and climate change, they’re hoping to use against Gov. Chris Sununu in next year’s election fight.  State Senate Majority Leader Dan Feltes, one of the Democrats planning to take him on, is already campaigning hard and collecting endorsements. And the state Democratic Party continues its social-media assault attempting to link Sununu to the unpopular Republican president.

Across the aisle, three Republicans (and possibly four if Corey Lewandowski decides to jump in) are lining up to take on Sen. Jeanne Shaheen in 2020, and at least one media outlet has declared her seat one of the top 10 most competitive in next year’s cycle.

And the response from New Hampshire voters? We’re fine, thanks. 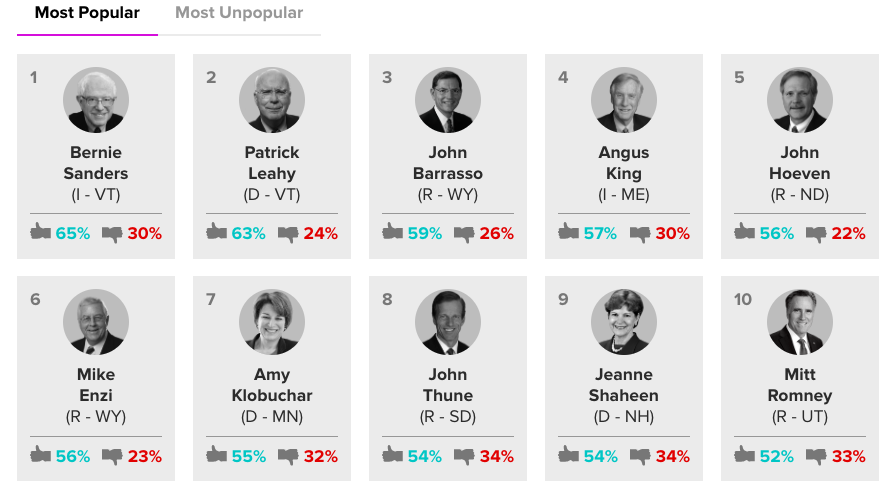 On Thursday Morning Consult released their quarterly rankings of governors and senators, and once again New Hampshire’s near the top of both lists.  Republican Sununu is the fifth most popular governor with a 62 percent approve/26 disapprove rating; while Democrat Shaheen is number eight among the 100 U.S. Senators at 54 percent approve/34 disapprove. And while her fellow Democrat Maggie Hassan didn’t make the top 10, coming in at number 15 with a 51/33 percent approval rating isn’t too shabby, either.

If America really is going through a populist revolution to overthrow the established political order, the news apparently hasn’t gotten north of Nashua.

Sununu’s numbers are even more impressive given the current political climate in the Granite State. President Trump remains wildly unpopular in virtually every New Hampshire poll, averaging a net -15 or so. And last year’s #BlueWave wiped out the GOP in the state legislature. Despite the fact that every federal seat is held by a Democrat (and most political pros believe is almost certain to remain that way after next year’s elections), Sununu is +36 among all voters, and among self-identified independents, too.

Sununu is even above water (barely) with Democrats, at +2 percent. By comparison, both Shaheen and Hassan are -42 percent among New Hampshire Republicans.  And while it’s true that Sununu’s dropped a bit in the Morning Consult rankings, from #3 to #5 on the Top Gov list, his approval number has actually risen over the past two years, from 59 percent two years ago to 62 percent today.

Morning Consult’s polls aren’t outliers, either. For a year polling has consistently shown New Hampshire incumbents are popular. And if the “it’s the economy, stupid” rule is still in play, they should be. The Granite State’s jobs market and household income numbers are terrific.

But these same voters (largely) hate President Trump and are (mostly) backing “big change” candidates like Elizabeth Warren, Bernie Sanders, Pete Buttigieg and Kamala Harris, etc. The progressive-Left candidates have more than 60 percent of the state’s Democratic primary vote, according to the current RealClearPolitics average–and rising.

Happy voters, a strong economy and a world at (relative) peace would seem to bode well for a Joe Biden candidacy. His “return to normalcy” pitch should play well in this environment. Instead, his candidacy is fading, Warren is soaring and Bernie Sanders’ is holding his support despite having a heart attack at 78 years old.

What does this say about New Hampshire politics?  Perhaps the “all politics is Trump” meme has been overblown. Sure, the front-page presidential politics are part of the Trump show, which is why the 2020 candidates aren’t talking about Granite State issues on the local stump. But why should they when nobody’s asking?

At the same time, they can see past the Trump effect when it comes to their local–and even federal–elected officials. Based on the polls, they’re certainly not holding Sununu responsible for Trump. And the social-media feeds of the New Hampshire delegation are surprisingly light when it comes to Trump-bashing content.

Once again, why jump out front when nobody’s asking?

The dynamic both parties will likely be dealing with next year is the tension between the typical voters, who seem pretty happy with the status quo; and the Trump-motivated voters — both for and against– who are likely to turn out for the big 2020 showdown.

If they’re in the mood to kick over the political box, and enough of them show up, even popular incumbents could be in for a surprise.