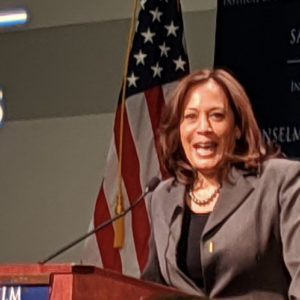 Harris to NH: “In a Relatively Short Time, Portsmouth Will Be Underwater”

During a speech at the New Hampshire Institute of Politics on Tuesday, California Senator–and Green New Deal supporter– Kamala Harris had a dire warning for the Granite State: The city of Portsmouth will soon be underwater due to climate change.

“I was in Portsmouth yesterday. If you look at the rates and the tables in terms of the decline, because we are talking about decline, within a relatively short period of time, it will be underwater. This is a real issue,” Harris said.

Harris was speaking at a Politics and Eggs breakfast event, which is a must-stop on the presidential campaign trail through New Hampshire.  Though she did not mention the Green New Deal by name, she has previously endorsed the proposal and is making climate change a central part of her White House bid.

Sen. Harris repeatedly asserted that she is a pro-science candidate and accused the Trump administration of “governing the American public by science fiction instead of science fact.”

“Climate change is real, and it is posing an existential threat to us as a community. We must not only take it seriously, we must have a sense of urgency about this,” Harris said. “I care about this issue, not because I have a particular desire to hug a tree. But I have a strong desire to have a healthy baby.”

Portsmouth is the tenth largest city in New Hampshire, according to City-Data.com, and the nation’s third oldest city. It is home to the Portsmouth Naval Shipyard, which has played a key role in America’s maritime and naval industries.

It is also 26 feet above sea level.  So how close is Portsmouth to being “underwater?”

“Not very,” says Judith A. Curry, an American climatologist and former chair of the School of Earth and Atmospheric Sciences at the Georgia Institute of Technology. “People using the IPCC models are talking about a three to four feet sea level rise by the end of the century, and even those are based on speculation,” Curry told NHJournal. “Some people are pushing alarming scenarios at the very edge of the speculation and even they are talking about eight feet.  Twenty-six feet isn’t on the radar screen.  The higher you go, the more speculative and unlikely the scenario.”

Curry isn’t alone. Fred Singer, a professor emeritus of environmental science at the University of Virginia and a founder of the Nongovernmental International Panel on Climate Change writes in the Wall Street Journal that “We can expect the sea to continue rising at about the present rate for the foreseeable future. By 2100 the seas will rise another 6 inches or so—a far cry from Al Gore’s alarming numbers.”

And former NASA Climatologist Dr. Roy Spencer has reported that “sea level rise, which was occurring long before humans could be blamed, has not accelerated and still amounts to only 1 inch every 10 years.”

Bjorn Lomborg, a leading expert on climate change issues who agrees that humans are impacting global temperatures but challenges the apocalyptic predictions of some of his fellow scientists, points to the latest data from the atolls of Tuvalu and Micronesia, which are far more at risk of being “underwater in the relatively short period of time” than the New Hampshire coast.

“Constant worry in media that climate-induced sea level rise will flood atolls like Tuvalu and Micronesia. Yet, new reanalysis of all studies shows that: No atoll has lost land,” Lomborg tweeted on Monday. He points to a new study that found “No atoll lost land area and that 88.6 of islands were either stable or increased in area, while only 11.4 percent contracted.”

But Sen. Harris is not running for president of the science club. She’s in a political fight for the Democratic Party’s presidential nomination. So is climate alarmism a smart political move? According to Gallup, in January 2019 just 3 percent of Americans named “environment/pollution”  as their most important issue.