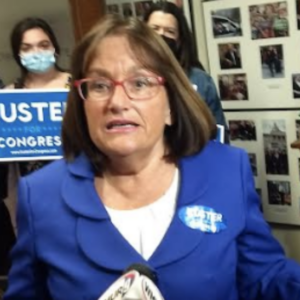 Now that Independence Day weekend is over, most of us are back at work. We’re returning to jobs that we depend on to pay our bills and feed our families. There are, however, some who are taking extra time off.

Ann Kuster and Congress are taking an extended vacation despite another economic report showing Americans’ purchasing power continues to decline due to massive cost of living increases.

Ann Kuster and Joe Biden’s reckless spending spree has resulted in the worst inflation in 40 years. Instead of staying in Washington to fix the problems they have created, Ann and her colleagues are essentially on vacation this week—even though their official August recess is only weeks away. Many Granite Staters are struggling or putting in extra hours just to keep their head above water. You would think Washington would take notice and get to work themselves.

After spending a decade in Washington, it’s clear Ann Kuster has mastered the D.C. playbook of creating problems, then placing blame, pointing fingers, avoiding responsibility, and finally skipping town. It’s their MO, but inflation and gas prices are not getting any better for families and businesses back in the Granite State.

We’re getting hit with increasing costs at every turn and home heating season is right around the corner. Working families in New Hampshire are going to be facing heartbreaking decisions in the months ahead. You’d think Ann Kuster would want to do something about it.

Kuster doesn’t need a vacation. She needs to be fired.

As an executive of a local family-run manufacturing company and the mayor of Keene, I know that you can’t solve problems by ignoring them. When a crisis arrives, you don’t just go on vacation and leave your customers and bosses behind when they need you the most.

New Hampshire’s Second District deserves better than absent Ann Kuster, and this November, we’re going to take back our seat at the table in Washington.

George Hansel is the mayor of Keene, N.H. and a Republican candidate for U.S. Congress in New Hampshire’s Second Congressional District. He wrote this for NHJournal.com.