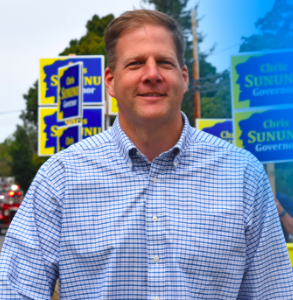 Governor Sununu: I Would Beat Shaheen, But I’m Running For Re-Election

“Tonight I’m announcing my intention to run for Governor in 2020,” Sununu wrote in a post on the Medium website.

“We are getting the job done…more people are working today in New Hampshire than at any time in history. We have one of the lowest unemployment rates in the nation and wages are at an all time high.

“What is also clear is that the Democrat’s agenda in New Hampshire has become more radical than any of us ever believed possible. This is highlighted by the fact that the Democrats in Concord, for the first time in history, put an income tax bill on the Governor’s desk. We stood up for New Hampshire citizens and vetoed that bill, but more Washington, DC extremism is on its way,” Sununu wrote.

Recent polls show that Shaheen’s approval is relatively weak for a long-term Democratic incumbent in a state that has been trending blue at the federal level.  Democrats were particularly concerned by an Emerson Univerity poll in February showed Shaheen tied with Sununu in a theoretical matchup at 44 percent, followed by a UMass Amherst poll confirming a neck-and-neck race.

“I truly appreciate the enthusiastic encouragement from so many that I run for the United States Senate,” Sununu said in his posted statement. “We all know that I would defeat Jeanne Shaheen, but others can too. Never before has a sitting twelve year Senator from New Hampshire accomplished so little.”

“While we regret missing the opportunity to retire Chris Sununu in a campaign for US Senate, we look forward to replacing him as Governor in 2020, along with his mentor Donald Trump. After 4 years of enriching himself and leaving New Hampshire families in the dust, Sununu will be defeated.”

Sununu is currently the third most popular governor in the country and New Hampshire was just named the second best state to live in by U.S. News and World Report. Sununu’s most recent approval rating from Morning Consult is 64 percent–eleven points higher than Senator Shaheen.