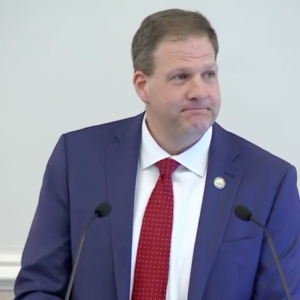 Gov. Sununu to Dem Legislature: Times Are Good. Don’t Screw It Up.

In a smartly-crafted budget address to the Democratic-controlled state legislature, Republican Governor Chris Sununu boxed in his political opponents with a litany of popular spending initiatives before turning on their “billion-dollar tax plans.”

Gov. Sununu, repeatedly ranked as one of the most popular governors in the US, demonstrated why he was able to survive a #BlueWave last November when so many of his GOP colleagues weren’t.  Rather than fighting over ideology, Sununu made the case that Democratic voters can have their pet-project spending without any new taxes, thanks to the pro-growth policies that have poured revenue into the state’s treasury. But that balance could be broken by big tax hikes and spending plans from Democratic politicians.

“Today in New Hampshire, more people are working than ever before, we have the second-lowest unemployment rate in the nation, and our economy is booming,” Sununu reminded the legislature. “Times are good.”

How good? Good enough to afford a long list of new spending items, from education to special needs to mental health to fighting domestic violence–all without any tax hikes.  Perhaps the best example of Sununu’s smart politics is his call for $250,000 “to cover the costs of AP exams for low income students.”

Spending tax money to help kids after they’ve proven their academic excellence is the sort of spending conservatives love.  But Sununu also reached straight out to issues important to Democrats, moderates and swing “suburban mom” voters.

Worried about property taxes? Sununu wants a  “$63 million dollar fund returning money back to cities and towns for Targeted School Building Aid,” to take some of the pressure off local homeowners.

Student loans keeping you up at night? “The answer to the high burdens of college debt is not to give free diplomas to everyone,” Sununu said, “it is to create a system that incentivizes students to stay and work in our great state through… a new $32 Million Student Loan Assistance program available to all students, and at no additional cost to the tax payer.”

Concerned about domestic violence? “We are increasing funding for the New Hampshire Coalition Against Domestic and Sexual Violence by over 30 percent to $2.4 million dollars a year.”

Even the so-called “Social Justice Warriors” get in on the action, with $250,000 for the state’s Human Rights Commission and full funding for the State’s Advisory Council on Diversity and Inclusion.

Put together, it paints a portrait of a politician who’s willing to spend money on issues that resonate outside his own party and across the aisle.

That was Sununu’s set up: The economy’s rocking, we’ve got money to pay for plenty of goodies, it’s not broke–so don’t fix it. Then he turned on the Democrats:

“This morning is the first opportunity I have had to address this legislature since all of the legislation you have proposed has been made public,” Sununu told the Democrats. “I just have to be frank–it’s extremely concerning.

“In total, billions of dollars’ worth of new spending has been proposed, rushed along outside of the budget process with no sustainable or viable way to pay for it.

“Further, I am deeply concerned with the number of proposed new taxes that are now being pursued. All together, totaling billions of taxpayer dollars.  Everything from an income tax, to a carbon tax, even a tax on canoes,” Sununu said. He also reminded the legislature of the nearly $1 billion in recent budget cuts when new spending ran into lower revenues.

The subtext was simple and impossible to miss: The state has all this money coming in, Sununu’s spending much of it on popular programs — and Democrats are still asking for higher taxes and more spending. Will it ever be enough?

Democrats can counter by talking up the benefits of their plans, they can make the case that costs like a carbon tax are necessary to achieve important goals. But Sununu’s fundamental argument–Things are good, don’t screw it up– is a tough one to beat.