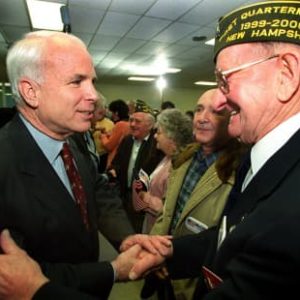 Gov. Chris Sununu on McCain and the Power of a Styrofoam Cup

What as Sen. John McCain’s key to success in New Hampshire? “The styrofoam cup.”

So said Gov. Chris Sununu at the Bedford, NH Republican Party breakfast on Monday, when asked to explain the special relationship with the man known as “New Hampshire’s Senator from Arizona.”

“The one thing that always stood out to me with Senator McCain was that he was the guy that walked in to an event with a styrofoam cup of coffee. Not the Starbucks, or whatever fancy coffee the other candidates would walk in with,” Sununu said. “McCain would walk into the room, plain styrofoam cup of coffee in his hand, and he would immediately head straight to someone he didn’t know.”

“He always had fans of his waiting in the crowd, but he would go up and immediately engage people he didn’t know, people who might be shy, maybe sitting in the back.”

“He really understood one-on-one campaigning and its value here in New Hampshire,” Sununu said. “I was watching this well before my political career started, just observing him, and it was incredibly impressive to see someone from Arizona who really got [New Hampshire] politics better than almost any other candidate. And the results showed it.”

Did Sen. McCain represent a New Hampshire style of Republicanism? An ideology that related to Granite State conservatives? Was that his connection?  Gov. Sununu doesn’t think so

“It’s more than politics, more than the platform. At the end of the day, across the political spectrum, folks in New Hampshire really want to look you in the eye and, and judge you up as a person, to size you up. And I think that’s why Sen. McCain did so well.”

So what did Sen. McCain get wrong?