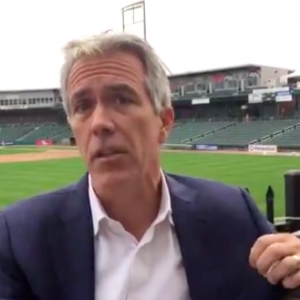 On the campaign trail in New Hampshire, former Illinois congressman and current GOP presidential hopeful Joe Walsh took a moment away from attacking President Trump to take on his former campaign manager.

“The last thing the Republican Party needs right now is Corey Lewandowski,” Walsh told NHJournal Wednesday, during a wide-ranging conversation about the current state of the GOP. “Trump’s been horrible for the Republican Party. So why would you even contemplate a ‘Mini-Me’ Trump?”

Lewandowski has been talking up a possible U.S. Senate run for weeks, though he’s backtracked a bit in recent days.

“The party is shrinking because of Trump. And now you’re going to put in a guy like Corey Lewandowski?  No, no, no, no, no. We need to broaden and we need to unify. That’s the last thing we need.”

When asked about the criticism of his candidacy and “Mini-Me Trump” nickname from Walsh, Lewandowski responded to NHJournal with a single word:

Walsh, a talk-radio host turned politician, is one of three Republicans challenging Trump in the GOP primary, and he’s an outspoken advocate of Trump’s impeachment. Walsh bases his pitch to primary voters on the fact that he voted for Trump himself in 2016 and now he feels betrayed.

“I’m making the toughest ask in politics. I’m asking Republicans to do what I did and acknowledge that 2016 was a mistake and that Donald Trump is unfit to be president. It’s a real punch in the face, politically. But if I can get over that hurdle then there’s an avalanche of voters who, I think, will move away from Trump.”

Walsh is undaunted, saying he’s appealing to the GOP’s survival instinct and the belief that Trump is an existential threat to the party.

“We don’t have to guess about Trump’s effect on the party, we’ve got data.  Every special election between the time Donald Trump was sworn in and the 2018 midterms, Republicans basically underperformed or lost, while Democrats overperformed.  And then there’s 2018. Republicans got spanked in 2018, and it was a referendum on Trump.

“I’m in this race to win — period. I’m not running to try and make a point. Trump wants this election to come down to either him or a Socialist like [Sen. Elizabeth] Warren, and he’s hoping people will vote for him, even though they don’t want to, because they won’t have any other choice.

“I’m that choice. For all the Republicans who say ‘I don’t like his personality but I like his policies,’ I’m saying you can have all the good without any of the bad.”