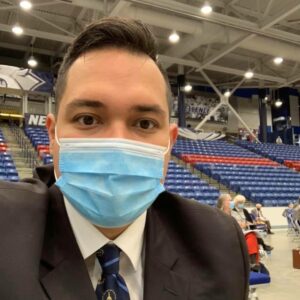 Late Friday, progressive Democrat Rep. Manny Espitia (D-Nashua) issued a quasi-apology for his suggestion that Black men are in danger when they engage with State House security officers.

“A statement I recently made in which I referenced the “heightened dangers Black men face in this country in the presence of law enforcement” has been misrepresented in a news article to imply that I was calling the integrity of our Protective Services personnel into question,” Espitia wrote to his House colleagues.

“I apologize for not choosing my words more carefully, and I appreciate you providing me the opportunity to make this important clarification,” Espitia said.

On Thursday night, Espitia issues a statement condemning Manchester Democrat Nicole Klein Knight, who has been the center of a maelstrom this week after reportedly using the “n-word” in a confrontation with Democratic activist Jonah Wheeler, who is Black.

In his statement, Espitia — who is also head of the New Hampshire Young Democrats — denounced Klein Knight’s language and announced his organization was withdrawing its endorsement. He also suggested her behavior wasn’t merely racist, but potentially dangerous.

“Rep. Klein Knight represents one of the most racially diverse districts in the state and should therefore feel an even greater responsibility to uplift Black, Brown, and Indigenous voices. Instead, she engaged in degrading, bigoted behavior against a young Black man, eventually calling security on him, despite being fully cognizant of the heightened dangers Black men face in this country in the presence of law enforcement,” Espitia wrote.

Republican legislators immediately reacted to Espitia’s suggestion that State House officers posed a danger to Wheeler or anyone else.

“A statement attributed to one of our House colleagues appeared in a news article today that one could view as calling into question the integrity of our Protective Services personnel,” Speaker of the House Sherman Packard (R-Londonderry) wrote in an email to House members. “To be clear, General Court Protective Services provides unbiased security services to legislators, staff, and the public. They serve every legislator, staff person, and member of the public equally, fairly, and with the utmost professionalism.

“The leadership of Protective Services holds their officers to very high standards and we have a high level of confidence in each of them,” Packard added. “We are lucky to have them.”

Mark Morrison, a former president of the New Hampshire Police Association and a member of Gov. Chris Sununu’s Law Enforcement Accountability and Community and Transparency Commission, told NHJournal that Granite State police officers do a good job of protecting everyone, including minorities. He said it is simply not true that people of color in New Hampshire are less safe around police.

“I feel very confident that all (law enforcement) agencies in New Hampshire really work to make sure that that type of treatment does not happen to anybody,” Morrison said. “I do not believe there is any systematic discrimination that takes place with any New Hampshire agency.”

Espitia is a leader of the progressive wing of the New Hampshire Democratic Party and, Republicans were quick to note his comment echoes the “Defund the Police” movement backed by many progressives, including the New Hampshire ACLU and the Black Lives Matter organization. The push to defund police departments is widely seen as hurting Democrats at the ballot box.

Espitia did not respond to a request for comment.

“No matter what color, race, anybody, I don’t think that puts anybody in safety concerns. For the most part, everybody is treated equally,” Trottier said.