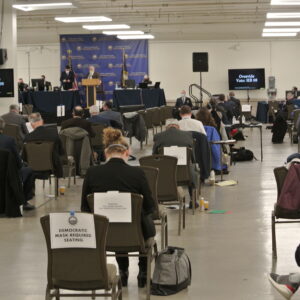 MANCHESTER — House Republicans notched a big win Wednesday on the first day of the legislative year, passing the redistricting bill that gives them an edge in the 1st Congressional District currently held by U.S. Rep. Chris Pappas.

The new map moves 75 towns from one district to another and makes the 1st District favorable to Republicans. It also makes the 2nd Congressional District, currently represented by Democrat U.S. Rep. Annie Kuster, more favorable to Democrats.

Rep. Ross Berry, R-Manchester, a member of the House Special Committee on Redistricting, said making one Republican and one Democratic district in the state is the right thing to do for voters.

“I think it was the right thing to do, we’re making two districts that are competitive,” he said.

House Speaker Sherman Packard, R-Londonderry, said the committee ought to be congratulated on the hard work the members did in order to generate the bill, including holding 10 pubic sessions, one in every county.

“They made transparency and open dialogue a priority throughout these sessions by being present in person and live streaming every public meeting. They included public testimony as part of the decision-making process, as well as an online map and testimony submissions.”

Democrats like Nashua Rep. Manny Espitia decried the map as an example of “partisan gerrymandering” and accused Republicans of gaming the system to their advantage. Rep. Paul Bergeron, D-Nashua, said the Republicans on the committee ignored the will of the people when they drew the new districts.

“Granite Staters gave clear direction requesting compact House districts that keep cities together and that local representation be provided to communities. It is a shame that community interests have been ignored in favor of blind partisanship,” Bergeron said in a statement.

Rep. Marjorie Smith, D-Durham, said the redistricting bill that was passed on Wednesday is laughable.

“It is extremely disappointing to see the New Hampshire GOP reject that public input, choosing to draw laughably gerrymandered districts instead.  We will no longer be able to brag about doing it ‘the New Hampshire way’ if these districts pass into law, as the Granite State will have become just another state that favors partisanship over community interests,” Smith said.

Berry rebutted Democrats’ claims about “fair maps” with a bit of math:

“While the minority of the committee speaks of fairness of the current districts, they have won 90 percent of the contests under the current map,” he said from the floor. There have been five congressional elections in each of the two districts since the maps were re-drawn after the 2010 Census. Democrats won them all except Rep. Frank Guinta’s 2014 win in the 1st district amid a national GOP surge.

The vote totals for the redistricting bill and amendments ended up being close in some cases, and there there was an effort to delay voting in order to allow members not present on Wednesday to vote on Thursday or Friday.

It’s not clear if the Democrats could have overcome the votes even if they had all their members present. Republicans had both the majority and the desire to win, according to Rep. Al Baldasaro, R-Londonderry.

“Republicans are together on redistricting,” Baldasaro said.

Democrats began Wednesday’s session by yet again expressing their concerns over meeting in person during the COVID-19 pandemic, even in the 30,000 square-foot space at the DoubleTree by Hilton in Manchester. Republicans responded that most working Granite Staters were on the job and in person, and there was no reason House members couldn’t meet in such a large, well-ventilated space.

There were attendance issues, but they were a result of ice-covered roadways in parts of the state, not the virus. State police said icy conditions on roads in central and southern New Hampshire Wednesday morning were responsible for at least 80 crashes in five hours.

Sources tell NHJournal the House GOP leadership was uncertain about whether to “special order” the vote on the newly-drawn maps on Wednesday. But after seeing a solid Republican margin throughout the morning, the decision was made to bring them to the floor. A minor rebellion by a handful of Republicans nearly tabled the vote on the new state House district map, but Speaker Packard cast the tying vote to keep the motion from passing.

With the big win early, the trick for the GOP is to make no unforced errors for the rest of the legislative session. The party got a black eye nationally over a few members engaging in vaccine conspiracy theories last year, among other controversies. There are still bills coming up for a vote on vaccine mandates, bail reform, and abortion. Rep. Dan Eaton, D-Stoddard, said the GOP is likely to trip itself up without any help from his fellow Democrats.