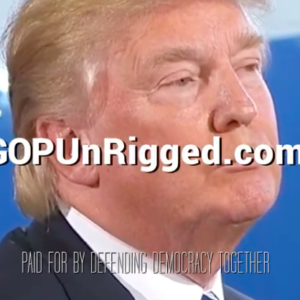 If you’re watching Fox and Friends tomorrow (Friday) morning, you may see the new ad from  Defending Democracy Together, a Republican advocacy organization founded by Bill Kristol, urging the NHGOP to maintain its neutral stance in any 2020 GOP POTUS primary.

“There has been chatter among New Hampshire Republicans calling for the elimination of the party’s neutrality requirement before presidential primaries, which would allow the state party to endorse President Trump against a potential primary challenger. A discussion is expected at the meeting at the end of the month,” the organization warns.

“We are running a commercial today and Friday during Fox and Friends in the Manchester media market urging the RNC not to rig the primary in Trump’s favor,” the organization said in a statement.

The original supporters of an NHGOP rule change, Rep. Fred Doucette and Windham, NH selectman Bruce Breton, told NHJournal last week they have no plans to present a proposal to change the party bylaws and allow NHGOP officials to publicly endorse candidates in party primaries. They didn’t submit such a change by the state party deadline that passed the first week in January.

Bill Kristol tells NHJournal that’s good news, but Defending Democracy Together is running the ad to bolster the idea of a wide-open primary as pressure from the Trump organization on GOP institutions rises.  He also notes that other states like South Carolina, along with the RNC don’t seem as dedicated to the tradition of open primaries as the Granite State.

“I feel much better about New Hampshire, actually,” Kristol said. “I’m confident the Republicans in New Hampshire–the home of the First In The Nation primary–aren’t going to let themselves be pushed around by Trump apparatchiks.”