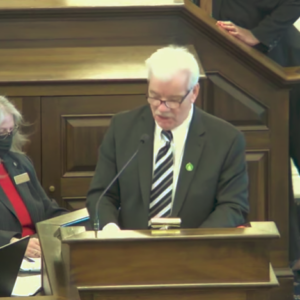 In a rebuke to progressive activists and the Black Lives Matter organization, 64 House Democrats broke with their party to back a GOP measure tightening bail restrictions. The bill is designed to repair the 2018 bail reform bill passed with a bipartisan majority and signed with much fanfare by GOP Gov. Chris Sununu.

Since then, the politics of the crime issue have changed, as Democrats have fled from the “Defund the Police” and decarceration policies their party once touted.

The rollback bill, HB 1476, limits the ability to release repeat offenders on “personal recognizance,” and requires more offenders to face a judge instead of a bail commissioner. It also cuts the maximum time an arrestee can be held without seeing a judge from 72 hours to 36.

Bill sponsor Rep. Ross Berry (R-Manchester) said the legislation leaves much of the 2018 bail reform in place while addressing the issue of repeat offenders who commit crimes while free on bail.

“This is the culmination of bipartisan effort over the last six months to address bail reform,” Berry said before Tuesday’s vote.

Crime rates across the U.S. have surged over the past two years and, while New Hampshire remains the safest state in the country, there has been an uptick in crime here, particularly in cities. Property crime in Manchester has gone up 10 percent in the past year, for example, and even Democratic Mayor Joyce Craig was on board with reforming the reform.

Craig has told NHPR repeat offenders and violent suspects should not get released on personal recognizance bail.

“However, those causing risk to our community and violent offenders should have bail restrictions imposed and should not be released on PR bail,” Craig said.

“I don’t always agree with my mayor, but we agree on this,” Berry said. “Manchester is done waiting.”

Opponents of the bill fell into two groups: Libertarian-leaning Republicans who want to limit government power as part of their ideology; and progressive Democrats who argued New Hampshire’s racist system unfairly punishes people of color.

Rep. Andrew Bouldin (D-Manchester) said changing bail reform would hurt drug addicts, homeless people, the poor, and minorities. He said amending the 2018 bill to hold repeat offenders would return the state to a system where the wealthy pay to get out of jail and the poor are stuck there.

“New Hampshire’s criminal laws are enforced with a staggering racial bias,” she said.

Crime data show Black Americans are arrested at approximately the same rate as the crime they commit.

In the past, Democratic leadership would be expected to “whip” the votes and keep more of their members in line. But with the passing of Minority Leader Renny Cushing, Democrats are left with Acting Minority Leader David Cote (D-Nashua), who has yet to attend a House session since COVID-19 struck and hasn’t cast a vote since 2020.

Conley argued the issue of repeat offenders needs to be addressed. “It’s not just a Manchester problem,” he said.

Rep. Patrick Long (D-Manchester) backed the bill, saying he hears from too many residents who are getting their cars and homes broken into by the same people.

“I get the police reports and the same people are being arrested again for the same crime,” he said.

One notorious case involves Nashua resident Jency Diaz, who in December of 2020 was released on bail after a domestic violence arrest and then proceeded to return to his apartment and “punched, slapped, head-butted and whipped” the victim, leaving her with a broken nose.

“This is a harmful step that would disproportionately impact and harm Black people in New Hampshire,” the ACLU-NH said after the vote.

And Tshiela had this ominous warning for Democrats who broke ranks: “I do want to remind those who voted in favor of this bill that only supporting racial justice when it’s politically expedient does not fare too well when people remember where you stood in times like this.”

On the libertarian side, Americans for Prosperity-New Hampshire opposes the bill, claiming it “disregards our fundamental legal framework and ignores defendants’ rights, creates confusion with conflicting language, and would result in more backlog for our already strained judicial system.”

The bill passed by the House on Tuesday isn’t the only proposed change. A similar bill sponsored by Sen. Jeb Bradley (R-Wolfeboro) recently passed the Senate with a 20-4 majority. Sununu, who signed the original bail reform bill in 2018, backs the changes saying there are too many unintended consequences from the first reform.