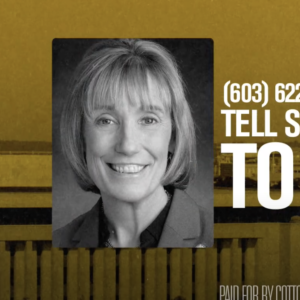 President Biden’s nominee for Health and Human Services Secretary is a California progressive with a record his opponents believe is far to the left, and Republicans want to make sure swing-state Democratic senators who vote to confirm him pay a political price for doing so.

New Hampshire Sen. Maggie Hassan is one of the Democrats targeted over their upcoming vote on Xavier Becerra’s nomination to head HHS. The ads are funded by Hassan’s colleague from Arkansas, Sen. Tom Cotton, widely believed to be a 2024 GOP presidential contender.

“You can’t trust Xavier Becerra with your healthcare. Tell your senator to vote no,” the ad concludes, with an image of Hassan and her New Hampshire office phone number.

While most of Biden’s cabinet picks have faced relatively little GOP opposition, the two exceptions are Becerra and Biden’s nominee for Office of Management and Budget director, Neera Tanden. On Friday, Sen. Joe Manchin (D-WV) announced he will vote against Tanden, leaving her nomination dependent on GOP support.

Republicans have been outspoken in their criticism of Becerra, particularly his record of California progressivism, and they hope to put purple-state Democrats like Hassan on the spot if they vote for the problematic nominee.

Bill Donohue, president and CEO of the Catholic League for Religious and Civil Rights, calls Becerra “President Biden’s worst nominee for a Cabinet post. The man is a menace to life and liberty and has no business serving in this capacity.”

Donohue’s opposition is hardly surprising given Becerra’s record on abortion, which even pro-choice advocates would concede is extreme. As a member of Congress, Becerra had a 100 percent rating from the NARAL, opposed a ban on third-trimester abortions, and even voted against preventing abortions based on the sex of the baby — couples aborting a girl because they prefer to have a boy, for example.

As California’s attorney general, Becerra took the extreme step of using state law to attempt to shut down crisis pregnancy centers, an effort overturned by the U.S. Supreme Court.

Becerra’s handling of the COVID-19 pandemic has also been rejected by the Supreme Court, in particular his attempt to enforce a ban on all indoor religious worship. Indeed, Becerra’s use of law enforcement to impose pandemic-related restrictions on businesses and individuals is one of the most aggressive in the nation.

“For nearly a year, we have seen state and local governments shut down houses of worship while they let bars, gyms, and other indoor facilities operate,” Sen. Marco Rubio (R., Fla.) said. “The Biden administration and HHS nominee Xavier Becerra should make clear they now understand this type of discrimination against houses of worship is clearly unconstitutional.”

But in New Hampshire, one of the most secular states in the country, it’s Becerra’s record on healthcare and illegal immigrant that are likely to give Hassan the biggest political headaches.

Biden’s would-be HHS Secretary supports the Medicare For All proposal that would abolish private insurance and take away the private healthcare coverage 146 million Americans currently use. A NHJournal poll taken in February 2020 found Granite Staters opposed this approach by a 2-1 margin.

As is her policy, Sen. Hassan declined to respond to questions about her views on either the nominee or the issues raised in the ads. However, in response to the announcement of Becerra’s nomination in December, Hassan posted a statement on her website that appeared to endorse Becerra’s healthcare policies:

“Xavier Becerra has a proven record of fighting to protect Americans’ access to health care as both a member of Congress and as Attorney General of California. We have a lot of work ahead of us to address the unprecedented public health challenges amid this pandemic, including ensuring the widespread distribution of COVID-19 vaccines. I look forward to talking to Attorney General Becerra about his approach to these challenges.”

After their one-on-one meeting on January 13, Hassan released another, more neutral statement. And she has pointedly declined to support Medicare For All, even when New Hampshire’s senior senator, Jeanne Shaheen, embraced it.

Hassan’s favorability rating is an unimpressive 41/36 percent, and she’s underwater with independents.

As Senators Manchin and Krysten Sinema have demonstrated, a single Democrat can derail any Biden nomination or initiative in a 50-50 Senate. It’s clear Republicans intend to remind Granite State voters of that fact every time Hassan casts a vote.