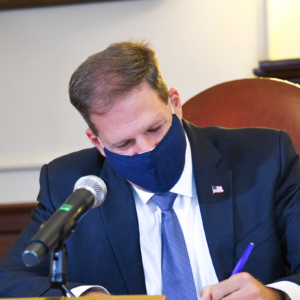 Gov. Chris Sununu’s announcement of a statewide mask mandate has sparked reaction from across the political spectrum, with many of his fellow Republicans rejecting the policy and Democrats dismissing it as too little, too late.

For political pros, it’s a sign Sununu has likely yet again hit the political sweet spot, reflecting the mixed mood of Granite Staters on how best to handle the COVID-19 pandemic.

During his Thursday presser, Sununu said, “Last time I checked, masks don’t have a political party. It’s not a political issue.” But polling (if it can be trusted) points to the opposite. Mask wearing — and mask mandates in particular — are extremely partisan. A recent NYTimes/Sienna poll found 90 percent of Democrats support a national mask mandate while just 29 percent of Republicans agree.

That partisan divide was in evidence in New Hampshire’s response to Sununu’s statewide edict. Republicans tended to react negatively or to stay silent.

As for major party figures like soon-to-be Speaker of the House Rep. Dick Hinch and incoming Senate President Chuck Morse, they haven’t made any public comment supporting Sununu’s mask mandate. Is that because they don’t support the policy, or because they don’t want to get on the wrong side of the anti-mask segment of the NHGOP base?

The voice of those Republicans can be heard from the ReOpenNH organization, a small but vocal group. “Sununu claims he is following the data in presenting this new mandate, but that is simply not true,” said Melissa Blasek, executive director of RebuildNH. “There is no quality research supporting the idea that a mask mandate is effective. Studies specific to COVID-19 have shown the ineffectiveness of masks, as have 60 years of studies surrounding masking to prevent influenza, which is spread in a similar manner to Covid-19.”

Unfortunately for RebuildNH, Sununu just won re-election in a 30-point landslide, and polls have consistently shown voters overwhelmingly approve of his handling of the pandemic.

Ironically, this is also a problem for Democrats who are trying to slam Sununu for not issuing the mandate more quickly. He beat their nominee, state Sen. Dan Feltes by a nearly two-to-one margin without a mask mandate.

Still, Democrats are sticking with that line of attack.

“And there your have it, NH bringing up the rear,” tweeted Rep. Debra Altschiller (D-Stratham). “Finally, we have a statewide mask mandate. #COVID19 is spreading — quickly, this is serious.”

State Senator Lou D’Allesandro (D-Manchester) noted, “As I said during a meeting of the GOFERR Legislative Advisory Board back in July, wearing a mask is a simple, commonsense measure that has been proven to reduce positive cases. Back in July, I made a motion to call on Governor Chris Sununu to issue a statewide mask mandate which was rejected down party lines.

“This mandate is long overdue, and while I am glad to see it finally put in place, I am disheartened at the amount of time gone by and the number of lives lost by playing politics with health and safety,” D’Allesandro added.

Only one problem: In July, the number of COVID-19 deaths in New Hampshire had fallen below 45, from a high of nearly 180 two months earlier. They would continue to fall in August and September before beginning their turn upward in October. All without a mask mandate.

Positive test rates and hospitalizations followed the same trend. In other words, there’s no evidence that a lack of a mask mandate in July had any impact on the current COVID-19 situation.

“In New Hampshire, about 12,000 people left the labor market last month, there are now record cases, 11 new outbreaks in long-term care, and a much worse COVID-19 situation than either Maine or Vermont. Everyone would agree that these drastic economic and public health impacts could have been mitigated if New Hampshire did this when the rest of New England did.”

Actually, everyone doesn’t agree. If anything, the data from the past six months shows that the actions taken last spring have had no measurable impact on the scale of the pandemic today. Keeping businesses shuttered until the Fourth of July, well beyond the original 30-day “bend the curve” lockdown,  didn’t stop the spike that began in October.

There’s no evidence that wearing masks from Memorial Day until Columbus Day would have, either.

Polls show that Americans overwhelmingly support mask mandates. These polls also show that 90 percent of Americans claim they wear masks, and 70 percent say they wear them almost all the time.

It doesn’t take many trips to the mall or strolls along downtown sidewalks (not to mention photos of political rallies on the Left and Right) to see these Americans aren’t telling the truth.

What appears to be true is that Americans, including in the Granite State, like the idea of making people wear masks, but don’t want to be forced to do so themselves. Given the extremely low level of enforcement the Sununu administration has applied to its coronavirus mandates thus far, it’s likely few people will feel the impact of this mandate.

Which, from a political standpoint, is probably the right place to be.