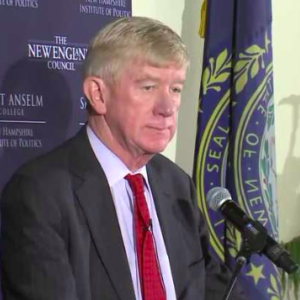 ‘Get Serious Or Get Out!’ Trump-Skeptic Republicans Frustrated By Weld’s Wobbly Campaign

“He needs to get serious or get out.”

That was the message one New Hampshire GOP activist had for NHJournal after Gov. Bill Weld’s bizarre call for President Trump to face the death penalty.

On MSNBC’s Morning Joe Monday morning, Weld said President Trump’s reported behavior on a phone call with the Ukrainian president was “treason, pure and simple,” and repeatedly noted that “the only punishment for treason is death.”

The activist was one of many NHJournal spoke to in the wake of Weld’s wild TV appearance who supported the former Massachusetts governor’s decision to challenge Trump in the past, but now question whether he’s helping or hurting the cause of Trump-skeptic Republicans.

Weld has always been a problematic Republican to take on President Trump in this populist era. As a liberal, pro-abortion Massachusetts Republican, he doesn’t appeal to the Evangelical base. As the Libertarian Party’s vice-president in 2016, and a public official who endorsed Barack Obama in 2008, he’s hardly a draw for party-loyalty purists.

Still, when Weld announced his candidacy in February, some in the GOP hoped he might be a voice for the small-government, libertarian principles the party championed in the pre-Trump era. Instead, he’s made few waves even in his Granite State back yard. A new Emerson College poll of New Hampshire Republicans found Trump had 80 percent support while Weld as at 13 percent, and a Boston Herald/Franklin Pierce University poll released the same week put Weld’s support at just 3 percent.

“I don’t think anyone views primary challenges as anything but quixotic at this point —  including the candidates — but that doesn’t mean people shouldn’t try,” Rory Cooper of the GOP firm Purple Strategies told NHJournal. “But if you’re going to do it, you should put together a real campaign that speaks to Republican primary voters and not Morning Joe panels. There is plenty of room to Trump’s right if a serious candidate wanted to try and occupy it.”

Instead, Weld’s been all over the map on policy, swinging from libertarian-leaning support for the Second Amendment to big-government policies like a carbon tax. If fact, the platform of the Libertarian Party Weld ran on just three years ago opposes the same death penalty he wants to impose on President Trump.

Then again, Weld’s talking so little about policy or GOP principles and so much about Trump’s personality that he’s essentially running yet another Democratic primary campaign against the president.

“If your talking points are indistinguishable from AOC’s, you are doing it wrong,” says veteran GOP strategist Alex Vogel.

“It would be one thing if there was a vibrant voice arguing about policies that people might actually engage with – but I think he is both the wrong messenger and frankly, it’s not a message that many Republican’s are embracing. That is particularly true if Weld decides to focus his limited voice around impeachment.”

Similar rumblings have been heard from other DC-based GOP insiders, and the conversation among Granite State Republicans is even tougher.

“These Hail Mary’s do nothing to enhance his standing,” New Hampshire GOP consultant Dave Carney said of Weld’s “death penalty” comments. “His lackadaisical approach will never move numbers. GOP primary voters who might consider backing a Weld candidacy don’t watch the morning cable shows on MSNBC or CNN. They work for a living.”

New Hampshire Republicans have noted how little campaign structure they’ve seen on the ground from a candidate who’s been running for six months. And several NHGOP insiders tell NHJournal that — as one put it — “Republicans would be ignoring his campaign completely, if he had a campaign to ignore.”

Assuming the Weld campaign is serious, and not just a vanity project as his critics claim, the candidate is in a bind. If he talks about GOP policy for GOP primary voters, he’s talking to an audience that’s overwhelmingly happy with the current incumbent. And if he talks about impeachment and treason, he reaches an audience that agrees with him, but is unlikely to vote in a GOP primary.

Each of his opponents has a case to make to Granite State Republicans: Joe Walsh–who supports Trump’s impeachment but not his execution– is a one-time Trump populist who feels betrayed by the Trump presidency. Mark Sanford is running, not so much against Trump, but more for a form of fiscal conservatism that was once a key plank of his party.

But what is the case for Bill Weld? Unlike his argument for trying Donald Trump for treason, he has yet to make it.