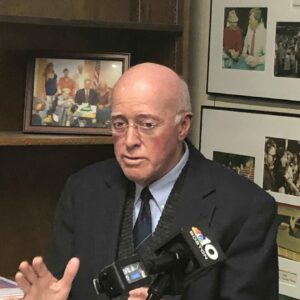 New Hampshire Secretary of State Bill Gardner said Monday his decision to retire had nothing to do with politics, but he had a pointedly-political message for his fellow Democrats backing a federal takeover of elections.

The timing of Gardner’s announcement came with unintended irony, coming the same day U.S. Senate Majority Leader Chuck Schumer (D-N.Y.)  released a “Dear Colleague” letter declaring his intention to end the filibuster rule in order to pass the Democrats’ federal voting legislation. The “Freedom to Vote” Act, as Democrats call it, would strip authority from state election officers like Gardner, as well as the state legislatures, to set federally-mandated rules for local elections.

Gardner has been an outspoken opponent of the legislation, as well as the earlier “For The People” Act, saying they undermine the state’s constitutional rights, will hurt voter turnout, and endanger New Hampshire’s vaunted “First in the Nation” (FITN) primary.

The federal legislation is supported by all four members of the state’s D.C. delegation. Gardner confirmed to NHJournal yet again that not one member of the delegation has ever contacted him to discuss the law’s potential impact on Granite State elections.

“Never. Not one word,” Gardner said.

Gardner, who was sworn into the first of his 23 terms in December of 1976, is known nationwide for his tenacious defense of New Hampshire’s presidential primary tradition. He’s gone head-to-head with national political powerhouses like Speaker Nancy Pelosi (D-Calif.) and the Democratic National Committee. The announcement that he’s going to retire as soon as his longtime Deputy Secretary David Scanlan can assume the post inspired words of praise from across the aisle — and across the country.

“We will miss Bill and his vast institutional knowledge of New Hampshire people, politics, and government. Here’s to a well-deserved retirement and best wishes from all the Sununus,” he said in a statement.

Even Arkansas Republican U.S. Sen. Tom Cotton — a likely 2024 presidential candidate and frequent Granite State visitor — got in the act.

“Secretary Gardner is a friend and a great servant of the state of New Hampshire. He’s been a force for democracy and free and fair elections in the Granite State and across the country. Now more than ever, we need leaders like Bill. He will be missed, but this is a well-earned retirement,” Cotton said in a statement to NHJournal.

Asked by NHJournal if his retirement was a blow to the FITN primary, Gardner said no. “Our primary gets stronger every four years, because every time we have one [a FITN primary], it gets stronger.”

“Grateful for Secretary Gardner’s decades of service to New Hampshire and his steadfast commitment to ensuring that New Hampshire keeps the First In The Nation primary,” Hassan tweeted. Hassan took to the Senate floor just before Christmas to announce she’s abandoning her long-standing support for the filibuster in order to pass the federal plan to supersede local election rules.

“This issue is fundamental to this state,” Gardner said, adding that “the majority of the town clerks are against this.”

And, he noted, even the voters of deep-blue New York just rejected a ballot initiative last year to allow no-excuse absentee voting. A sign, he said, that most voters think the current system works fine — as evidenced by the high turnout in the past three election cycles.

“They say it’s the ‘For the People’ act,” Gardner said. “What people? The ‘people’ are voting this down. Are they [supporters of the federal law] really saying we don’t have free and equal elections in New Hampshire?”

Some Democrats called out Gardner for his participation in former President Donald Trump’s Voter Fraud Commission, an effort Gardner defended Monday as an attempt to use transparency to restore voter trust.

But most echoed the sentiments of state Sen. Lou D’Allesandro (D-Manchester), who was on hand for Gardner’s announcement. “There’s isn’t a person who is as conscientious and knowledgable as Bill Gardner. And we need more of that knowledge here in the Statehouse.”

Gardner, who was first elected to the New Hampshire legislature in 1972 — the same year Joe Biden first entered the U.S. Senate and Richard Nixon was re-elected president — wrapped up the press conference with a simple, “And that is it.”