They are the headlines every potential presidential candidate wants to see a month after the midterms:

“The storyline…is that the heart of the Democratic Party really wants Warren,” wrote Chris Cillizza of CNN.com, while Rep. Keith Ellison of the DNC  said on Face the Nation: “I think that right now people want an authentic candidate. Elizabeth Warren comes off as a very authentic person. So that is what people are gravitating towards.”

That’s quite a December for any candidate. Unfortunately for Liz Warren, that was December….2014.

Four years ago this week, MoveOn.Org was touting the Massachusetts liberal as the progressive’s rising star on their  “Run Warren Run news” website. (“We’re excited for week 2 of the Run Warren Run campaign…”) A few weeks later they would pour $250,000 into their “Draft Warren” efforts, backed by veteran Democratic campaigners like New Hampshire’s Kurt Ehrenberg and Blair Lawton of Iowa.

The effort lasted into the summer of 2015, with excited Democratic activists gathering more than 365,000 signatures trying to rally a reluctant candidate to run for president. 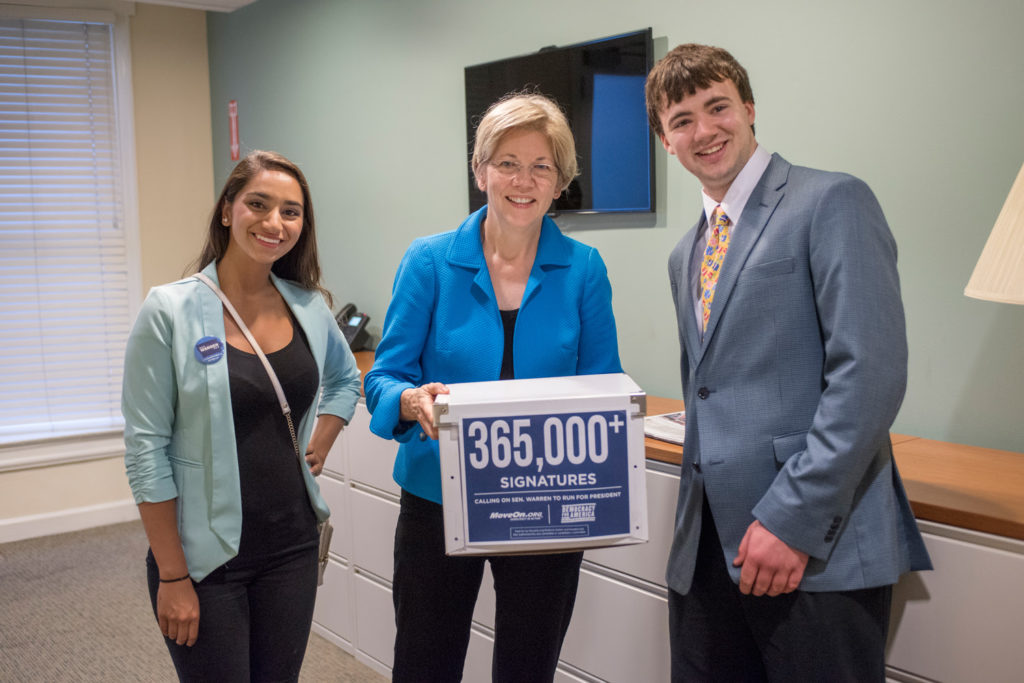 It’s hard to imagine a “Run Warren Run” grassroots wildfire today. Despite her highest of high profiles, polls among Democrats show her in the single digits in the 2020 race. Most Democrats in her home state of Massachusetts aren’t keen on her running.  And her decision to release a DNA test in her ongoing #Fauxcahontas fight with President Trump—just weeks before the midterms—was viewed bad timing and worse strategy.

And so now Liz Warren is trying to transform herself into the very obstacle she faced four years ago: The next Hillary Clinton.

In a story headlined “Elizabeth Warren Forges a 2020 Machine,” Politico reports that if Warren pulls the trigger on her POTUS campaign, “she’ll be rolling out arguably the most advanced and sweeping infrastructure in the Democratic field, a plug-and-play campaign that could give her a massive head start on nearly every contender in the burgeoning primary roster.”  That includes $12.5 million in the bank and more than 50 people on her campaign payroll.

She’s “built a shadow war room….that has encompassed work in all 50 states and close coordination with more than 150 campaigns,” Matt Viser reports in the Washington Post. It’s an impressive tale. But is it true?

Some Democrats tell InsideSources off the record that they think this is largely spin from the Massachusetts senator, an attempt to build up her standing as a member of the 2020 short list.  “They’re pushing this 150 campaign number so it looks like she has a machine,” one New Hampshire Democrat told NHJournal. “But she’s no Hillary Clinton—at least, not yet.”

But could she be?  Hillary Clinton had the benefit of the Clinton brand, built on eight years in the White House and a narrow loss to the politically-talented Barack Obama in 2008.  Sen. Warren, on the other hand, is a Democrat in one of the most Democratic states in the country. The last Republican to win a general election campaign for the U.S. Senate was Ed Brooke in 1972.  (Scott Brown won a special election in 2010 and promptly lost to Warren two years later.)

In fact, according to data analyst Harry Enten of CNN, Warren is an underperforming Massachusetts Democrat. Adjusting for the high number of Democratic voters in her state, “Warren’s performance was the sixth worst of all Senate Democrats” in 2018, Enten says.

When it comes to 2018, all the standard caveats go here: It’s early, none of the best-known Democrats considering a run have even announced, the Iowa caucuses are more than 400 days away, etc.  But the stark contrast between the mood of progressives today and four years ago is hard to miss.  Instead of headlines like “A Democratic Party That Realizes Its Soul Lies With Elizabeth Warren,” the headline in the Wall Street Journal reads “Too Soon For Democrats to Dump Liz Warren?”

Yes, the opinion pages of the Wall Street Journal lean right. But the headline from the left leaning Washington Post reads  “As Her DNA Test Still Reverberates, Sen. Elizabeth Warren’s Political Operation Shows Fissures.” Even her longtime allies at the Boston Globe have editorialized “Warren missed her moment in 2016, and there’s reason to be skeptical of her prospective candidacy in 2020.”

“She has become a divisive figure,” they added.

As Hillary Clinton demonstrated, you don’t have to have grassroots excitement or progressive bona fides to win the Democratic nomination. Bernie Sanders had both and she still beat him (with a little unauthorized help from the DNC).  But if Hillary couldn’t generate excitement, she could generate something else:

Fear. Few people wanted to cross Hillary Clinton, and fewer still wanted to fight against the first woman POTUS nominee of a major party among Democrats so focused on identity politics.

Liz Warren, unfortunately, has none of those advantages. There’s no cost to crossing her, there are at least three other women on the potential-candidates list, and the glass ceiling (for the nomination, anyway) has already been broken.

Four years ago, the chant was “Run Warren Run!”