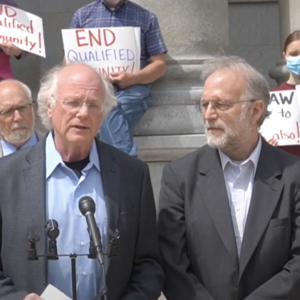 Ben Cohen and Jerry Greenfield of Ben and Jerry's ice cream at a press conference outside the NH state house.
News

Ben and Jerry’s founders Ben Cohen and Jerry Greenfield came to Concord on Monday to lobby for an end of qualified immunity for Granite State police officers. It’s a cause that brought together activists from the left (ACLU) and right (Americans for Prosperity). But just last week, Cohen was campaigning in Philadelphia for District Attorney Larry Krasner, whose progressive politics have made him a cause célèbre on the far left, the star of a PBS documentary (“Philly D.A.”) and, pro-police advocates say, one of the most anti-cop politicians in America.

As Politico describes him, “The man who had sued cops 75 times, represented Black Lives Matter, promised to end cash bail — and was widely seen as the most liberal district attorney candidate in the country.”

Cohen’s support for eliminating qualified immunity, police organizations say, is a sign that whatever language is used in the bill, the real motive is to hurt cops.

In Philly, police groups are backing a Democratic challenger to Krasner in the May 18 primary, former assistant D.A. Carlos Vega. Last week the local Fraternal Order of Police rolled a Mister Softee ice cream truck in front of Krasner’s office to send the message that he’s “soft on crime.”

Cohen struck back, attacking both the FOP and its choice of frozen confection.

“As a lover of both ice cream and justice, I’m writing in response to the Philadelphia FOP’s ‘Mr. Softee’ stunt last week,” Cohen said in a press release. “To be clear, Mr. Softee isn’t even ice cream. It is pumped up with a lot of hot air which is somehow frozen in a limp sort of way. It is chock full of artificial ingredients. In short, it’s fake ice cream. Just like the lies that the FOP has been telling about a courageous fighter for true justice and one of the best D.A.s in the U.S.”

For a progressive like Cohen, Krasner would be one of the “best D.A.’s in the U.S.” He’s ended prosecution for many low-level crimes and instructed his prosecutors to seek lighter sentences, all the while advancing the Black Lives Matter narrative that police are fundamentally suspect.

Now, he wants New Hampshire voters to back plans to roll back protections for police officers from lawsuits over their actions while on the job. Cases like George Floyd and Daunte Wright have helped push forward discussion about police reform. Republican Sen. Tim Scott (S.C.) and the GOP majority in the U.S. Senate pushed police reform — though one without a qualified immunity rollback — last year, but Democrats like Sens. Maggie Hassan and Jeanne Shaheen used the filibuster to prevent it from coming to the Senate floor for a vote.

But the debate continues over where to draw the line between giving police the power they need to enforce the law and preventing abuse by overreaching or incompetent officers. Some potential supporters of ending qualified immunity may be put off by the seemingly anti-cop approach of advocates like Krasner and Cohen.

Ben and Jerry were joined at the statehouse event by Reps. Paul Berch (D-Westmoreland) and Tony Lekas (R-Hudson) in advance of the introduction of a new amendment to revive the measure after it narrowly failed earlier this year.

The bill, HB111, failed by only 6 votes at a March House session, with dozens of GOP in favor – and dozens of Dems opposed to the bill.

“Lawmakers need to seize this opportunity to ensure Granite Staters can have their day in court when they have had their constitutional rights violated by a government official,” AFP-NH Deputy State Director Ross Connolly said in a statement, “We’re proud to join a broad, bipartisan coalition to support opening an avenue to allow justice for victims and strengthening our state constitution. It is wrong government officials can use ignorance of the law as an excuse for infringing a person’s civil rights and we urge the legislature to change this broken status quo.”