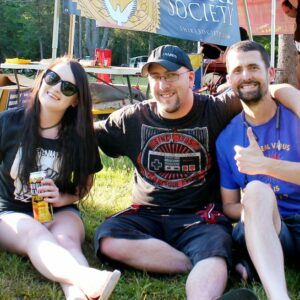 Renee Spinella, charged in the federal wire-fraud case centered on Free Keene’s Ian Freeman, will not go to jail as part of her plea agreement.

Spinella, 26, was sentenced to three years of supervised release on Thursday in United States District Court in Concord for her role in the money laundering and wire fraud scheme.

Spinella is one of six people charged in the alleged multi-million scheme, and currently one of three people to take plea deals. Her husband, Andrew Spinella, 36, pleaded guilty earlier this year and is awaiting sentencing. Free Keene activist Nobody, formerly Rich Paul, 55, was sentenced to two years of supervised release last month.

Of the remaining suspects, Collene Fordham 63, of Alstead, had the charges against her dropped. That leaves Freeman, 42, and Aria DiMezzo, 34, facing more than 30 indictments in the case. The pair are fighting the charges in court and seeking to have some charges dismissed.

Freeman and DiMezzo are accused of taking in millions of dollars through their Bitcoin exchanges and Bitcoin ATMs. The pair also used personal bank accounts and accounts for made-up churches like the Shire Free Church, the Crypto Church of New Hampshire, the Church of the Invisible Hand, and the Reformed Satanic Church, in order to conduct their bitcoin businesses. The pair allegedly lied to banks in opening their accounts and got others to open accounts on their behalf, according to court records. Part of the operation for Freeman was to help cyber criminals swindle money from lonely victims, according to the indictments.

Freeman reportedly has access to millions in cash and cryptocurrency, according to prosecutors.

Freeman is no stranger to local politics. He is currently running as a Republican in Senate District 10. DiMezzo made an unsuccessful campaign for Cheshire County sheriff in 2020 as the only Republican in the race.

In 2015, federal agents took Freeman’s computers, hard drive, and other devices as part of the child sex abuse image investigation that so far has not produced an indictment or charge, or apparently turned up any evidence. Freeman is currently suing the FBI to get his devices returned.

As part of her sentence, Renee Spinella was fined $2,000. According to court records, her actions were responsible for more than $78,000 in fraud.