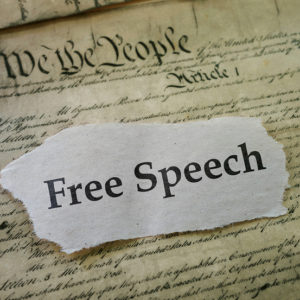 LUCAS: Freedom of Speech — A Time for Choosing

In America, freedom is our most precious value. At the very top of the list are our First Amendment freedoms. Freedom of speech.  Freedom of expression.  Freedom of religion.  Freedom to share our views.  It’s the rock-solid foundation of our democracy.  It’s absolutely essential to our workings as a free society.

Yet, today, we find our basic freedoms under attack.  Censorship of views and opinions that are not in ‘lockstep’ with those in power are being squelched.  Big Tech and their political allies are wielding unprecedented power in allowing some Americans to express their views, while denying others.  In other words, shutting down the public forum for all those with whom they disagree, all those who will not conform to the dictated orthodoxy.

Recently, we have seen numerous instances of Big Tech taking action to ban dissenting views.  Whether it be the shutting down of Twitter accounts during the fall elections, the shadow banning of public commentators or the outright censorship of opposing views, all these actions have become increasingly part of the Big Tech playbook.  Now, with the most recent attempts by Google, Apple and even Amazon to shut down access to Parler, the only major alternative to Twitter, the attempt to silence dissent is in full attack mode and dangerously gaining strength.

Moreover, even beyond blocking other voices to be heard, there is also credible evidence that Google and other players have proactively wielded their power to influence public opinion, skewing their search algorithms to favor their preferred viewpoints. Meanwhile, Facebook and others have allegedly targeted specific messages to certain individuals and groups in a stealth effort to influence our country’s direction.

This is a ‘slippery slope.’  As Americans, we must confront a fundamental question: Do we choose the serfdom and authoritarian censorship and manipulating propaganda of a Communist China or do we choose American freedom?

Imagine our political system without the protections which allow dissenting voices to be heard.   In such a world, one party could easily become dominant and then use the instruments of government to squelch opposing views, prevent political discourse and effectively shut down all opposition.  Thus, fully undermining the very basis for our democratic system of government.

In such a circumstance, those in power would not only have full control of our government apparatus but also the power to dominate our society.  Without our freedom of speech, we as individual dissenters could suffer the same fate as the brave young man in Tiananmen Square in 1989 who faced down the Chinese army tanks and reportedly was later was executed.

With this in mind, I would like to ask a simple question.  I direct this question to any of those in our society who would consider trying to suppress our freedom of speech.  My question is: Why?  What are you afraid of?  What is the lasting harm of letting others express their opinions?  If you have confidence in the validity and righteousness of your ideas, there’s really nothing to be afraid of.  Let the ideas be tested in the marketplace.

But therein lies the problem, doesn’t it?  Because I believe those who actively try to shut down the expression of others actually lack confidence in the validity and righteousness of their own ideas.  They are not confident their ideas will ultimately win – when fully scrutinized and subject to open evaluation in free debate.  Therefore, they attempt to evade the ‘marketplace’ and resort to suppressing the expression of others. Thereby, violating one of our most precious freedoms as Americans.

We now find ourselves at a critical point in the history of our nation.  Will we come together in a positive way and respect the right of all Americans to express themselves in a free, open and protected manner?  Or will we succumb to a centralized, authoritarian power that dictates what we are allowed to say, what we are permitted to think and who is given access to the means of communication?

I know where I stand on this question.  And, I know that millions of Americans, silent for too long, strongly agree.  Our freedom of speech is fundamental to who we are as Americans.  It is time to be silent no more.  It is time for our voices to be heard and to unleash the power of the American spirit – truly from coast to coast!