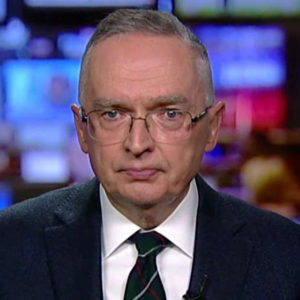 How does Ralph Peters feel after walking away from Fox News?

“I just feel a great burden has been lifted because I got to the point where I hated going into the Fox studios because of what Fox had become,” the retired Army colonel and longtime Fox military analyst said in an interview on Friday.

Peters first made the announcement two weeks ago in an email to his Fox News colleagues in which he claimed the network was “assaulting our constitutional order and the rule of law, while fostering corrosive and unjustified paranoia among viewers.”

“Over my decade with Fox, I was proud of the association. Now I am ashamed,” Peters said at the time. His view of the network hasn’t improved since his departure:

“As a brand new second lieutenant four decades ago, I took an oath to support and defend the Constitution of the United States. And that doesn’t go away ethically or morally when you take your uniform off,” Peters said today.  “I had to leave. It wasn’t a bold choice on my part. I did my duty by leaving when Fox began undercutting the Constitution, which in my view it is currently doing.”

When he made his announcement in mid-March, Peters specifically called out “prime-time hosts” as the worst perpetrators (“people who have never served our country in any capacity”). Some of his critics complained at the that he didn’t name names. Friday, he did:

“You saw this recent flap with Laura Ingraham, attacking the Parkland School shooting survivors, attacking the kids?  My rule always has been ‘it’s just fine to pick a fight with someone more powerful than you, but you don’t pick on the weak’. What Laura Ingraham did was despicable.”

Peters denies that he has a vendetta against Fox News.  “I don’t want to see Fox destroyed. I think somebody needs to go in and reform it.”

“Fox News was always a valuable conservative voice…it provided conservatives an outlet on television, a counterbalance. But over the last year and a half with the rise of Trump, Fox News has become nothing more than a propaganda outlet for the Trump administration.”

UPDATE: Fox News reached out to Inside Sources through a spokesperson:

“There is no truth to the notion that Ralph Peters was ‘blocked’ from appearing on the network to talk about the major headlines, including discussing Russia, North Korea and even gun control recently. In fact, he appeared across both networks multiple times in just the past three weeks.”