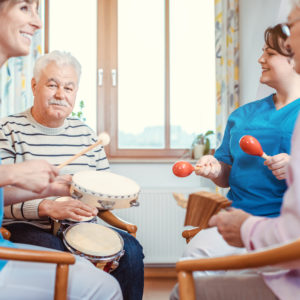 For N.H. Patients and Therapists — Please Don’t Stop the Music

Posted to Politics February 12, 2020 by Robert Graboyes and Jared Rhoads

The New Hampshire Legislature is considering a law that would protect its citizens from the imminent dangers posed by (adjust your eyeglasses) music therapists. The proposed law would prohibit the practice of music therapy without a state-granted occupational license and presumably would be enforced by government officials whose license plates proclaim “Live Free or Die.”

New Hampshire is not the only state facing such pressure. Nearly one-third of Americans require government-granted licenses to perform their jobs, according to research by our colleague, Matthew D. Mitchell. Bill 1286 would push the percentage a bit higher — unnecessarily and perhaps destructively.

Under the guidance of music therapists, patients listen to and/or perform music as part of their clinical therapy. Supported by evidence, the field is systematic and scientifically rigorous — not haphazard and practiced willy-nilly.

Typically, proponents of licensure argue that governments are best situated to protect the public’s health and safety. Charlatans and incompetents could endanger patients, their argument goes, so therefore we should support licensure for physicians, dentists, pharmacists and others. One can be fairly averse to government regulation and still favor licensure of medical doctors.

It’s far more difficult to make a similar argument about music therapists. While an unqualified practitioner might provide limited utility to a patient, his capacity to cause actual harm is quite limited. Most of those minimal risks can be alleviated via certification (perhaps by an association of music therapists) or referral (perhaps by a doctor or hospital).

The downside of licensure, however, is real.

Insiders often use licensure to harness the state’s power to bar potential new competitors. In some states, anyone who wishes to work as a manicurist, funeral attendant or interior designer must pay hundreds of dollars in application fees and complete months of costly, mandatory training programs.

In an iconic case, the state of Missouri barred African-American hair-braiders from practicing their trade unless they had taken 1,500 hours of courses utterly irrelevant to their trade — including the use of chemicals in hair treatments or mastery of specific, largely Caucasian hairstyles.

The Institute for Justice, a public-interest law firm, has articulated the high costs of licensure requirements (including tuition fees of up to $20,000) and spearheaded legal actions by some of those harmed, including the Missouri hair-braiders.

An IJ report, “At What Co$t?: State and National Estimates of the Economic Costs of Occupational Licensing” specifically mentioned music therapy. According to that report, in 2016, three individuals asked the Minnesota legislature to require music therapists to obtain occupational licenses from the state.

The requests didn’t come from people who had been harmed by music therapy, and the petitioners offered no evidence of such harm. The three were, in fact, established music therapists asking that they and all practitioners be required to obtain a license.

Bill 1286 would require music therapists to have a bachelor’s degree or higher in the field and complete 1,200 hours of clinical training. This would not disadvantage current practitioners who already check these boxes. It would, however, harm those wishing to enter the field — particularly those whose training followed a different route (say, a general degree in psychology followed by an apprenticeship in music therapy).

This is especially concerning because, as Mitchell notes, licensure can especially impose disadvantages on minorities, non-English-speakers and transients (such as military spouses).

By limiting competition, licensure harms not only potential market entrants but also patients. With less competition, incumbent providers can raise their fees, doing real harm to patients, in contrast with the hypothetical harm that advocates imply licensure would prevent.

Music therapy ought to be practiced by capable, competent people. But that doesn’t require licensure.

Under the status quo without state licensure, music therapy in New Hampshire looks to be doing just fine. According to the website of the Certification Board for Music Therapists, there are 34 board-certified music therapists in the Granite State, or about one per 40,000 residents. Searching for practitioners online, one finds websites for several independent and group practices throughout the state, all of which look upstanding and none of which looks particularly shady. Most importantly, searches for accounts of serious harms caused by music therapists in New Hampshire turn up nothing.

Safe, high-quality music therapy services can thrive by subjecting the field to normal market mechanisms: consumer reviews, provider reputations, and professional referrals, all of which provide the upside benefits without the downside costs.