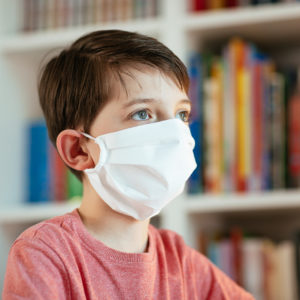 As school administrators contemplate COVID safety precautions for the coming school year, the state is reporting zero COVID-19 deaths among school-aged children since the start of the pandemic.

Dr. Benjamin Chan, New Hampshire’s state epidemiologist, said the virus is still a danger and could be a growing one for younger people. Since the vaccines have become available for older adults, the virus has shifted to younger Granite Staters, Chan said.

“Ten percent of all infections currently are in children under the age of 10,” Chan said in a conference call last week. “COVID-19 is an infection that impacts all age groups.”

But in fact, it doesn’t — at least not in the same way. Many children, for example, are entirely asymptomatic. And they rarely suffer serious health impacts. How rare?

In New Hampshire, there have been zero COVID-19 deaths of school-age children.

Out of more than 100,000 infections in the Granite State, there have been 18,259 infections among people aged 0 to 19; of those infections, 22 were serious enough to result in hospitalizations. That’s about 1 percent of all hospitalizations since the pandemic began.

As David Leonhardt at the NYTimes reports, “Among children under 12, who remain ineligible for the vaccine, serious forms of Covid are also extremely rare. Children face bigger risks when they ride in a car.”

As a result, many local parents are rejecting calls for student mask mandates when schools reopen. They don’t want to follow the lead of places like Atlanta, where city schools will open in early August while daytime temperatures remain in the 90s, and schools are mandating masks for children as young as kindergarten.

In New Hampshire, the decision is being left to local school districts.

Chan recently hosted a conference call to go over the new guidelines from the state for reopening schools, based on the latest information from the CDC. Chan said New Hampshire will strike the balance to keep children safe in schools.

“The overall goal is to get all kids back to in-person learning … and minimize the risk of COVID-19 transmission in schools,” Chan said.

That means New Hampshire will not mandate COVID rules for schools, instead leaving decisions on how to implement best practices to the local community. Chan said the school should look at active cases, local transmission, and vaccine coverage when determining policies like mask-wearing and social distancing.

While the CDC is recommending indoor mask-wearing for all unvaccinated people, Chan said that’s not something New Hampshire can legally impose. Instead, schools will have the flexibility to enact mask-wearing rules as needed.

Some politicians and education officials are urging the mandate for New Hampshire.

Megan Tuttle, president of the New Hampshire chapter of the National Education Association, criticized the state’s lack of hard rules in a recent interview with NBC Boston.

“We had hoped for a set of minimum safety standards for all schools to achieve before they were safe to reopen,” Tuttle said. “Instead, we received 56 pages of ‘shoulds’ not ‘shalls.’ The fastest way to undo the remarkable progress New Hampshire has made against the virus is to allow these guidelines to define how we reopen our school.”

Despite the data, several New Hampshire school districts are imposing a mask mandate.

The Oyster River School District in Durham, for example, is requiring children as young as three years old to remain masked while in school. Salem, on the other hand, isn’t requiring masks at all.

Supporters of masks for children argue that any risk is unacceptable. Opponents point out the risk to schoolchildren is so low, it’s equivalent to the traditional flu.

Influenza, which kills about 60,000 people a year, resulted in 187 deaths among children up to age 17 during the 2017-2018 flu season nationwide. And forcing young children to wear masks isn’t without risk, as science writer John Tierney has noted.

“I still wear a mask when I’m going into public locations and I’m around other people who I don’t know,” he told the Union-Leader, even to the grocery store.

Even at the grocery store? Yes, Chan said.

“Until my children can be all fully vaccinated, I will still take precautions to prevent potentially picking up the virus and then bringing it home to my kid,” Chan said.

How does a fully vaccinated person “pick up the virus?” How does a mask prevent it? Studies show cloth masks have an average filtration efficacy of just 28 percent. Isn’t the vaccine supposed to stop the spread?

Chan is unclear on these points.

He did suggest, however, that during the school year symptoms of colds and flus, which are similar to COVID, would be treated more seriously than in the past. Children with symptoms should likely get sent home for testing and parents should keep sick children home.