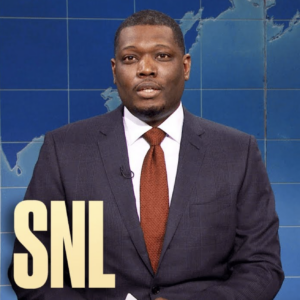 I’ve been watching “Saturday Night Live” since my freshman year of high school. That was 1975, its inaugural season. My mother and father didn’t restrict my viewing, although there wasn’t anything too offensive other than some fallow years of mediocre ‘Not Ready For Primetime (Or Any Other Time) Players,’ and bad writing.

I loved the Tina Fey years (mean girl jokes about Palin notwithstanding), the Dana Carvey years, the Gilda Radner years, the Bill Murray, the Chris Rock, the Martin Short years, and of course the Eddie Murphy years. Comedy gold.

And even though the quality has dipped in recent times, there is still that nugget of hilarity you find nestled in among the Pete Davidson dreck. It’s usually enough to make me overlook the hyper-progressive political pandering of the show which, during the Trump years, perfected the art of ridiculing conservatives. Tina was snarky towards Sarah in a previous iteration, but the whole cast was a heat-seeking missile aimed at insulting Trump voters. It’s okay. I can stomach most of it. We all can.

But this Saturday was the first time I actually threw something at the television.

In an opening sketch about the recent gubernatorial race in Virginia, one of the punchlines was about how ironic it was that education became a central issue in the race since Glenn Youngkin’s voters didn’t go to college.

It was stated as a fact, and just like that, an entire group of people was defined as uneducated (and likely toothless) simply because they voted against the wizened, desiccated ghost of Terry McAuliffe.

Normally, I’d roll my eyes and move on. But this one hit a nerve. Lately, Democrats and other progressives have made a point to highlight the importance of education in their campaigns. That’s understandable as the bloodletting at school board meetings across the country has attracted national attention and thrown a negative light on troubling progressive agendas.

But in campaign ad after campaign ad, in op-ed after op-ed, and pouring from the mouths of cable news commentators like the fetid water from stone gargoyle fountains is the idea that conservatives are too stupid to understand the issues. They gaslight us with claims that Critical Race Theory is a myth, wonder why we want our children to die of the COVID plague. and think books about sodomy are cultural enrichment.

When the writers at SNL suggested that only stupid people could have voted for Youngkin, my Italian-Irish blood reached a slow boil. To avoid third-degree burns, I turned off the TV and tweeted this:

Best people I ever met, outside of my father, who worked his way through college at night while sweating through blue-collar jobs.

The idea that those who voted for Youngkin are uneducated rubes fails on two fronts. First, as noted by my good friend and Virginia resident Carolyn, the majority of residents of voting age in Virginia have college degrees. That’s understandable, given that the state has some of the finest universities in the country, including the College of William & Mary and the University of Virginia.

More importantly, that’s ultimately irrelevant. A college degree, while desirable, does not increase our value as human beings, or our right to be represented in the political process. Obama forgot that when he talked about those who cling to their guns and religion. So did Hillary with her basket of deplorables.

My grandparents had to leave school before 5th grade, to work. Mike and Mamie had callouses on their hands before they were teenagers. My mother had a high school diploma. My father managed a college and then a law degree working three jobs during the day and going to school at night.

They collectively had more character and decency than the people ridiculing them.

I am so tired of the arrogance of at least some liberals. They assume a posture and attitude that exudes condescension, all the while pretending that they speak for the dispossessed. They might have degrees, but they have no humility.

And they are guaranteeing the election of many more candidates who understand that the value of a human being is not measured by the number of letters after her name.