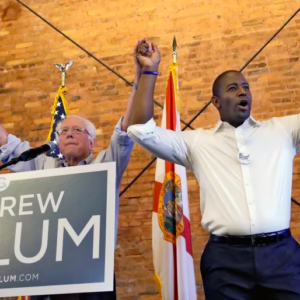 Florida Democrat Andrew Gillum rode a surge of liberal support from young people and progressive activists to defeat a primary field dominated by better known and better funded rivals and become his party’s nominee for governor.  With the backing of Bernie Sanders and other outspoken liberals, he won one of the biggest upset victories of 2018 thus far.

“He has laid out a vision for a new course for the state of Florida and our country,” Sen. Bernie Sanders said of Gillum’s victory. “Tonight, Floridians joined Andrew in standing up and demanding change in their community. That’s what the political revolution is all about and Andrew Gillum is helping to lead it.”

Could it happen in New Hampshire?  Gillum’s race offers several interesting parallels with the Granite State.

Andrew Gillum is the 39-year-old mayor of Tallahassee who was outspent by the other four Democrats in the race and never lead in the polls. In a campaign where more than $100 million was spent in total, Gillum and his backers spent less than $7 million.

Obviously Florida is a far bigger state with large, expensive media markets, so these numbers are far from anything New Hampshire would see. But what about the overall trend– progressive passion beats money and establishment backing in 2018?

It’s hard to look at a candidate like Gillum and not think of New Hampshire Democrat Steve Marchand. His opponent, Molly Kelly, has far more money and the backing of virtually every major Democrat in the state. Like Marchand, Florida’s Gillum embraces progressive issues that excited the base, like Medicare For All, tax hikes on the wealthy and a $15-an-hour minimum wage.  Reading the “Issues” pages on the Andrew Gillum and Steve Marchand web pages inspires a sense of deja vu.

And the New Hampshire parallels don’t end there.  The Florida five-way primary for governor also mirrors the Democratic congressional primary in NH-01: A multi-candidate field, a couple of well-funded candidates dominating the polls. Could a hard-core progressive inspire the base and pull a Gillum-style upset here?  Rep. Mark MacKenzie, Rep. Mindi Messmer, Lincoln Soldati, Terence O’Rourke and (of course) Levi Sanders are all running to the left of the front-runners, Chris Pappas and Maura Sullivan. Could one of them catch fire?  Or does the fact that so many candidates are running in the “Sanders” lane mean none of them can consolidate the votes they need for an upset?

Rep. MacKenzie, for example, has significant backing from New Hampshire unions, giving him the potential for a turnout organization that could challenge his more well-funded rivals. He’s also been outspoken about his progressive beliefs.

That’s not the sort of red-meat rhetoric being offered by the Pappas or Sullivan campaigns at the moment. Could it pull enough progressives to give him an upset win?

“I have the longest record of any candidate fighting for progressive causes,” Rep. MacKenzie told NHJournal. “The government should work for all of the people of this country and not the rich and powerful. Centrist Democrats are not the answer. I believe people want a candidate who will stand up and confront power and will not fall prey to corporate interests and big money. Bernie Sanders stood his ground and gave people hope. I supported him from the beginning and believe people are looking for tested leaders who will fight for them.”

Last night’s democratic primary in Florida proves what we’ve been hearing on the ground in New Hampshire for months. Voters are sick of candidates chosen for them by the establishment, and sick of candidates who think they can buy support with glossy TV ads. New Hampshire voters, just like Florida voters, are ready for the kind of bold, progressive ideas from a candidate they know shares their values, not the same old re-hashed talking points sent up from DC. I know what it’s like to live on a fixed income – it’s why I drive Uber part time to help make ends meet. It’s why our campaign is leading among the progressives and why we’re within striking distance of two establishment candidates that don’t relate to the working, the poor, those on disability, on social security. Voters know that Washington changes people. I’m not going to be changed by Washington – I’m going there to change Washington. That’s what NH voters want.

Gillum’s win was an “upset” for a reason: Candidates who are outspent by huge margins and trail in the polls almost always lose. That’s true in every state. But his victory is a reminder that, particularly in the Trump era, anything can happen.