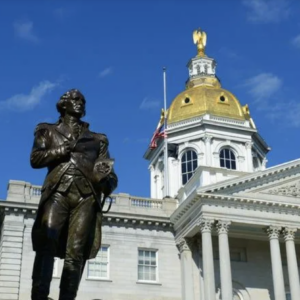 New Hampshire’s primaries for U.S. Senate and both congressional seats are getting all the media attention, but two years ago it was New Hampshire legislative races that made headlines. It was the only state in the country that flipped both chambers from Democratic to Republican. (And despite Joe Biden carrying the state by nearly eight points.)

Across the state, Democrats and Republicans are now fighting it out for a chance to run in November and either keep the state house red or flip it to blue. And the outcomes of these primaries can tell us something about the state of each party.

Do Republicans want a more moderate, centrist party? Do Democrats prefer more progressive members? These five races will tell the tale on Tuesday.

The most talked-about race that doesn’t involve a job in D.C. is without a doubt the bare-knuckled GOP brawl for Senate District 16.

Two GOP state representatives are duking it out over a seat that became open when current state Sen. Kevin Cavanaugh (D-Manchester) chose to challenge Executive Councilor Ted Gatsas (R-Manchester), leaving the now more GOP-leaning District 16 without a Democrat candidate and sparking a battle between two factions inside the NHGOP.

Rep. Barbara Griffin of Goffstown is a more traditional conservative while Hooksett Rep. Michael Yakubovich is a Liberty Republican with ties to the Free State Project.

Outside money has gotten behind Yakubovich with Win at the Door (Young Americans for Liberty’s campaign arm) and Americans for Prosperity backing him, while Griffin is supported by the Senate Majority PAC’s counsel and assistance, which is run by State Sen. Jeb Bradley (R-Wolfeboro).

Griffin, who was endorsed by the Union-Leader, has raised nearly $50,000, including donations from state senators Regina Birdsell, John Reagan, and Ruth Ward as well as NHGOP matriarch Augusta Petrone.

Yakubovich raised slightly more, $56,000, much from libertarian-leaning sources such as Rep. Keith Ammon (R-New Boston), Rep. Josh Yokela (R-Fremont), who co-sponsored an impeachment resolution against Gov. Chris Sununu last year, and Daniel Richard from Lebanon, who has spent the last two years fighting against CRT and masks in schools.

The primary winner is all but guaranteed to go to the State Senate. Democrats didn’t file a candidate but have a write-in primary candidate ready to run. Which way the NHGOP primary voter base leans remains the question.

Few things will guarantee a primary against a sitting Republican state representative; voting against right-to-work legislation is one of them. So it’s no surprise that Wolfeboro GOP Reps. Brodie Deshaies, who broke with the party and opposed RTW legislation, now faces a primary opponent. In addition, Deshaies loudly and proudly backed Sununu against the majority of House Republicans on curtailing the executive branch’s emergency powers in the wake of the governor’s unilateral actions during the COVID pandemic.

Rep. John MacDonald, an incumbent who voted in favor of Right To Work, is also facing a challenge.

Dr. Larry Borland, a retired doctor who recently relocated from Pennsylvania, and Katy Peternel, a nurse, both stepped up to challenge the incumbents, promising more pro-Liberty votes.

Americans for Prosperity backed both Borland and Peternel over Brodie Deshaies, who scored 58 percent on its 2022 scorecard, and John MacDonald, who scored 67 percent.

Peternel earned the backing of 2020 U.S. Senate nominee Corky Messner, a Wolfeboro resident, and both earned support from Win at the Door, which frequently deploys hordes of door-knocking teams as elections approach.

The incumbents, on the other hand, have the endorsement of Governor Chris Sununu according to a Facebook post by Deshaies. They’ve also got the backing of Senate Majority Leader Jeb Bradley, a favorite in town. Will the money and work put in by outside organizations like AFP and Win at the Door be enough to boost the newcomers, and will it be enough to get right-to-work laws across the legislative threshold in 2023?

Five-term Rep. Paul Berch (D-Westmoreland) has served in a four-town district since 2013, but with redistricting comes change; his district now includes five towns and four wards from Keene.

The change drew him into a district with incumbent Rep. Amanda Toll, who is running as a slate with newcomer Renee Monteil. Both are endorsed by Rights and Democracy New Hampshire, a far-left nonprofit organization that promotes causes like ending all fossil fuel use, a Medicare-for-All healthcare system, and funding schools with a “more equitable” system than property taxes, such as an income tax.

While Berch isn’t going to be mistaken for a Republican, progressives say he’s not progressive enough for the district. More than once he’s worked with colleagues across the aisle, for example, teaming up with Rep. Tony Lekas (R-Hudson) on repealing qualified immunity.

Notably, Berch also came to the defense of Nicole Klein-Knight (D-Manchester) after her infamous n-word incident involving Rights and Democracy activist Jonah Wheeler. Knight reportedly shouted the racial slur at the young Black man several times during a State House encounter. Berch wanted to withhold judgment until the incident could be investigated while Rights and Democracy, along with BIPOC organizers, sought Klein-Knight’s immediate resignation. In the resulting debate, anti-Jewish sentiment among some progressives was highlighted. The rift, which lingered until the tragic death of Democratic Leader Renny Cushing, left hurt feelings.

Berch, who is also Jewish, may pay a price for his tepid defense of Klein-Knight as the tandem primary team attempts to knock out the four-term incumbent.

No, Sununu is not going to lose on Tuesday. But observers will be watching the numbers.

Members of the House GOP caucus make no secret of their frustration with the three-term Republican.

Last cycle, Karen Testerman of Franklin failed to hit double-digits in her primary challenge of Sununu, even as the debate over Sununu’s COVID policy was raging. This year, Testerman is joined by anti-Sununu conservatives Thad Riley of Brentwood and Julian Acciard of Derry.

How much will Sununu’s veto of the congressional redistricting map, the promised veto of a parental bill of rights, and a veto of a school mask mandate ban bill hurt the popular Republican among primary voters?

Sen. Tom Sherman, Sununu’s Democrat challenger, will be watching closely, looking for weakness to seize on. Many observers believe Sununu is likely to take up to 80 percent of the vote in Tuesday’s primary. If that number drops closer to 60 percent, Sununu’s political opponents will take notice.

Blasek, a freshman, has used her House seat to aggressively push back on Sununu’s handling of COVID-19, catering to anti-vaccination activists and opposing Sununu’s use of executive power during the pandemic.

Sylvia, best known for his advocacy of a vote to secede from the union, is also at the center of a fight over management of the county-owned Gunstock Mountain resort. He’s joined by Silber and Terry. After a walkout by key employees over Sylvia and Co.’s behavior, the far-right representative was forced out, stepping down as chair of the Belknap County Delegation. The management team returned and now all three face primaries from more mainstream Republicans

Yokela, a two-term Fremont Republican who also supported the pro-secession amendment, faces a popular town official in his primary. AFP and Make Liberty Win are backing Yokela and campaign finance forms for both show a lot more than one mailer being sent in support.

Abramson, from Seabrook, has been registered as a member of every major party over the arc of the last decade, but currently serves as a Republican. In 2020, he knocked off incumbent Jason Janvrin in a primary to win re-election. He, too, is a pro-secession Republican.

CORRECTION: An earlier version of this article mistakenly reported that Rep. John MacDonald voted against Right To Work legislation. He voted in favor. NHJournal regrets the error.