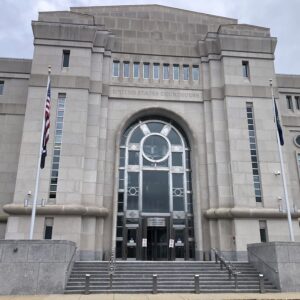 CONCORD — Andrew Spinella is skipping prison as part of the plea agreement he entered in the Keene Crypto 6 money laundering case.

Spinella, 36, pleaded guilty to one count of wire fraud on Tuesday. Two other federal conspiracy charges are being dropped as part of the deal.

While the agreement does not explicitly require Spinella to testify against alleged ringleader Ian Freeman, the charge itself implicates Freeman in a scheme to defraud banks.

Spinella pleaded guilty to a wire fraud count stating he created bank accounts in his own name, and then gave control of these accounts over to Freeman in order to allow Freeman to use the accounts to sell Bitcoin. Assistant United States Attorney Georgiana MacDonald told Judge Joseph Laplante the government has text messages between Andrew Spinella and his wife, Renee Spinella, detailing the scheme.

MacDonald said Renee Spinella explained to her husband in the texts similar bank accounts she opened for Freeman had been closed because of banking laws.

Laplante asked Andrew Spinella point-blank if he was guilty during Tuesday’s hearing.

“I feel with everything going on, if I were to take it to trial, it would make it far worse,” he told the judge.

Laplante pressed Spinella on his guilt, saying he could not accept a guilty plea if Spinella did think he was guilty of the crime charged.

“I don’t mean guilty in some cosmic sense,” Laplante said.

Spinella continued that it would be worse for him if he took the case to trial and if he was tried with the five other defendants. Laplante again asked if he was guilty.

“There’s too much evidence that says that I am,” Spinella said.

Renee Spinella, 25, was also scheduled to enter into a plea agreement, but she did not appear in court Tuesday. She was reportedly feeling unwell and her hearing is now set for Thursday. Renee Spinella is also currently charged with conspiracy along with Freeman, her ex-boyfriend. Freeman, 42, Colleen Fordham, 62, of Alstead, Nobody (formerly Richard Paul), 54, of Keene, and Aria DiMezzo, 36, of Keene, are all charged with conspiracy to operate an unlicensed money transmitting business.

Freeman is a long-time libertarian activist who first moved to New Hampshire as part of the Free State Project. That organization distanced itself from Freemen in 2014 when he repeatedly used his radio show to call for lowering the age of consent.

In 2015, federal agents raided Freeman’s Keene home and seized dozens of computers and other devices as part of an investigation into the alleged possession of child sex abuse images. No charges were ever brought in the case. Freeman filed a lawsuit against the FBI agent who obtained the search warrant last week.

Nobody (Richard Paul) did jail time for a drug conviction in 2014 and has run for both mayor of Keene and governor of New Hampshire. He was held the longest in jail after the money laundering arrest last year, due in part to his threats against law enforcement.

DiMezzo, who describes herself as a trans satanic anarchist, ran unsuccessfully for Cheshire County sheriff as a Republican in 2020.

Freeman and DiMezzo both started churches that the indictments claim they used as part of the $10 million money-laundering scheme. According to court records, since 2016, the defendants have operated a business that enabled criminal customers to exchange over $10 million in fiat currency for virtual currency, charging a fee for their service. They operated their virtual currency exchange business using websites, as well as operating virtual currency ATM machines in New Hampshire.

Prosecutors claim Freeman knew he was laundering ill-gotten money from criminals. The indictment alleges the defendants knowingly operated the virtual currency exchange business in violation of federal anti-money laundering laws and regulations. Additionally, the indictment alleges some defendants opened bank accounts, some in the names of purported religious entities, like DiMezzo’s Satanic Temple.

Agents took dozens of guns and close to $200,000 in cash out of Freeman’s Keene homes during the March 2021 raid when he and the others were arrested. He was estimated to have more than $1.6 million in cryptocurrency at his disposal that authorities know about, according to court records.