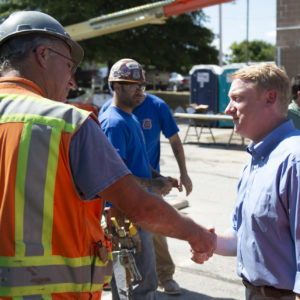 State Sen. Dan Feltes, one of two Democrats vying to replace Gov. Chris Sununu, announced Thursday he’s received the endorsement of IBEW Local 2320, the seventh labor union to throw its support behind the Concord legislator in the Democratic primary.

That’s in stark contrast to his opponent, Executive Councilor Andru Volinsky, who has yet to receive a single New Hampshire union endorsement in this race.

“As we rebuild our economy after this crisis, it’s critical we have a Governor who will look out for working men and women. I know Dan will always put people and workers first,” Soule said.

“I’m honored to receive the endorsement of IBEW 2320. Working families are getting crushed right now.” Feltes said. “We had some of the highest costs in the nation before this public health crisis and now families dealing with even more pressure. We need to put them first in this recovery.”

The decision of these trade unions to endorse Feltes over Volinsky is good news for the senator, though several N.H. Democratic insiders noted that unions don’t play the same outsized role in Granite State elections that they do in states like Michigan and New York.

About 10.3 percent of the New Hampshire workforce are union members, average for the U.S. as a whole — but the lowest percentage in New England.

At the same time, observers say, strength among the trade unions — whose members tend to be less partisan than government-sector unions like the State Employees Association (SEA) — is a sign that Feltes might be more competitive in the general election against Sununu. That’s a key selling point in the Democrats’ primary.

And with the uncertainty of the coronavirus’ impact on the two upcoming elections, union volunteers could have an outsized impact on the elections if, for example, the state ends up holding mostly mail-in ballots via “excuse-free” absentee voting. Door-to-door organization could have a significant impact on voter participation in both the primary and general elections.

One point of contention between trade unions and Volinsky is his decision to take aggressive stances — like opposing the Granite Bridge natural gas pipeline — that threaten blue-collar jobs in New Hampshire. They have, however, garnered him the endorsement of pro-Green-New-Deal activist groups like the Climate Strikes Coalition.

The Granite Bridge project was endorsed by all 10 Democrats in the State Senate in 2018, including Feltes and progressive Sen. Martha Fuller Clark — hardly a right-wing cause.

And Volinsky has already come under fire from the Carpenters Union Local 352 over his role on a legal team representing a contractor ordered to pay more than $400,000 in back wages and damages to employees. The union’s business manager, Joe Donahue, wrote in an email that Volinsky’s work representing Brian Corriveau of Kevin Corriveau Painting, Inc., was “deeply concerning.”

“When you listen to Dan you can tell he gets it. He’s not like some politicians who tell you one thing and then do something different” Donahue wrote. “When he gives you his word, you know he’s going to do everything he can. He has our back in the State House, now it’s time we have his.”

The Democratic primary is currently scheduled for Tuesday, September 8.