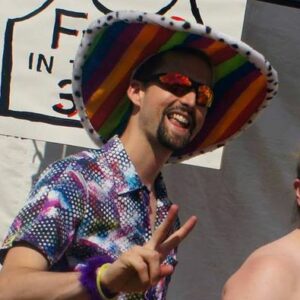 Ian Freeman got an early Christmas gift from federal prosecutors as 17 of the 25 felony charges against him were dropped days before his trial was set to begin.

“While I am happy to see the bulk of the charges in my case go away, I’m sad for my friends who were intimidated into wrongful convictions for victimless ‘crimes’ on charges that would likely have been dropped anyway,” Freeman said on his blog over the weekend.

Freeman is the last of the so-called ‘Crypto 6’ defendants. Four of his co-defendants took plea deals. The fifth had all charges dropped. His trial is set to begin this week in the United States District Court in Concord, with jury selection starting Tuesday morning. Freeman’s attorney, Mark Sisti, told NHJournal he hopes to give his opening arguments in the case Tuesday afternoon.

Freeman was facing a potential of more than 400 years in prison if convicted of the original 25 charges. Prosecutors dropped all 12 wire fraud counts, three money laundering charges, as well as several other counts including conspiracy to commit bank fraud and wire fraud as well as continuing a financial crime enterprise.

Freeman was arrested in a March 2020 raid at his Keene home along with co-defendants Aria DiMezzo and Nobody, formerly known as Rich Paul. Freeman’s ex-girlfriend Renee Spinella and her husband, Andrew Spinella, were arrested at their homes in Derry. Alstead resident Colleen Fordham was also arrested as part of the bust.

Prosecutors dropped the charges against Fordham early in the case. DiMezzo, Nobody, and the Spinellas ended up taking plea agreements that netted them light sentences. Freeman said on his Free Keene blog taking a plea is always a mistake, and that his friends succumbed to pressure from aggressive prosecutors.

“They stack a ton of charges against you, then threaten to stack even more if you don’t tap out. A few years of probation and a felony starts looking really good compared to 30 years in prison, so it’s understandable why people will take a plea, even though they didn’t actually commit the crime of which they are accused,” Freeman wrote. “The prosecutors love it as they rack up conviction after conviction, ruining innocent peoples’ lives and bolstering the prosecutors’ careers. Plus, they never have to bother preparing for and going to trial. It’s super easy for them and it almost always works.”

Freeman said his friends are now stuck with the convictions on their records, though they likely could have fought the charges and won in court.

“Now they are saddled with felony convictions for the rest of their lives for something that sounds really bad. The reality is, the accusations were simply that they’d lied to a bank, and that it was not even to try to scam the bank out of money, but only to do things like keep an account open,” Freeman wrote.

Freeman is accused of taking in millions of dollars through Bitcoin exchanges and Bitcoin ATMs with the help of DiMezzo and the others. Freeman reportedly used personal bank accounts and accounts for made-up churches like the Shire Free Church, the Crypto Church of New Hampshire, the Church of the Invisible Hand, and DiMezzo’s Reformed Satanic Church in order to conduct their bitcoin businesses. He allegedly lied to banks in opening accounts for his churches and other businesses and got the others to open accounts on his behalf, according to court records. Part of the operation for Freeman was to help cyber criminals swindle money from lonely victims, according to the indictments.