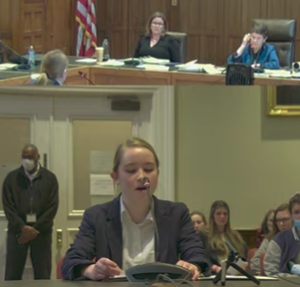 Families, Students Push Back on Efforts to Repeal EFAs

“I implore you, do not eliminate the Education Freedom Accounts, this program helps so many students and their families,” said Emma Jackson, a sophomore at Holy Family Academy in Manchester.

Jackson, like many students who testified, has been able to go to a private school for the first time thanks to the EFA’s. The program “funds students instead of systems,” as school choice advocate Corey DeAngelis of the American Federation for Children puts it. The state’s share of a child’s public school funding follows the student to other education options like private or home schooling.

“Currently, most of the families that are using the Education Freedom Accounts are low-income families,” said Kate Baker Demers, executive director of the Children’s Scholarship Fund of New Hampshire.

“The families that are using them are extremely grateful and think it is right and just that they have access to their education funding,” she said.

Kahn, a Keene Democrat, is concerned that the success of the program will spell trouble for taxpayers down the road. He said the program is costing more than $8 million this year and is expected to double next year. On top of that, Kahn said, the state has cut funding for public education by more than $80 million in the current two-year budget.

“Every child deserves access to an adequate education, but this isn’t the way to do it,” Kahn said.

Meanwhile, per pupil spending on k-12 education has risen during Gov. Chris Sununu’s administration to the highest level ever.

New Hampshire’s public schools lost more than 8,000 students in the last year as more parents grew frustrated with COVID-19 imposed-remote learning, among other problems. Baker Demers said parents realized during the pandemic that there are more options than their local public schools that fit their family needs better, and those options were finally within reach.

“They didn’t have these options without the EFAs,” she said.

Some Democrats opposed to EFA’s, like Rep. Marjorie Porter (D-Hillsborough) send their own children to private schools while opposing allowing state funding to follow low-income kids to these same schools.

“I certainly understand the need for families to find an alternative to public schools to meet the needs of their children,” Porter testified. “My own two children attended the same public school where I taught. My daughter was fine with it, but not so my son. He was experiencing difficulties, so we sent him to a local private school until he was middle school age. It was good that we had that option.”

“My parents sent all 4 of their kids to Catholic school on a USAF officer salary and they would never, ever expect a government handout to do so,” Rung wrote on Twitter.

“That’s the point, to overcome those inequalities,” she said.

“These are students who struggled in their old learning environment for a variety of reasons from bullying, learning difficulties, or health concerns,” said Sarah Scott from Americans for Prosperity New Hampshire. AFP-NH was heavily involved in the passage of EFAs and the Americans for Prosperity Foundation spent last summer spreading awareness of the new program to parents.

Families, Scott says, “are ecstatic to have been given the chance to have their children learn in a setting that helps them to thrive.”

Kahn said EFA’s downshift costs for public education onto local property taxpayers, an assertion advocates deny. Sen. Denise Ricciardi (R-Bedford) said the tax money is following the child through the system, and it will not result in higher taxes.

That is true in part because, while state funding follows the student, local funding remains in the schools. As a result, every student who uses an EFA leaves behind around $10,000 or more for their former school to spend on the remaining students. More money, but fewer students.

Regardless of the math or the praise of parents, the state’s teachers unions still oppose the EFA program.

“This is a multi-million-dollar example of failed leadership that will ultimately hurt our kids,” said Meg Tuttle, president of the NEA-NH, the state’s largest teachers union.

Tuttle did not elaborate on how families choosing what they believe are better education choices for their children “will hurt kids.”

Senate Majority Leader Jeb Bradley (R-Wolfeboro) was a  prime sponsor of the legislation creating EFA’s last year. He made it clear this week he will fight to keep the program operating.

“Our Education Freedom Accounts have proven to be more successful than anyone imagined. Currently, 1,635 students are enrolled in the EFA program, giving working families the power to choose the best educational path for them,” Bradley said. “The pandemic has shown us the need for greater educational options, especially for families who traditionally could not afford the choices wealthier families have always had.  EFA’s provide that pathway. Students of hard-working families of modest means deserve the opportunity for education choices that best suit their needs.”