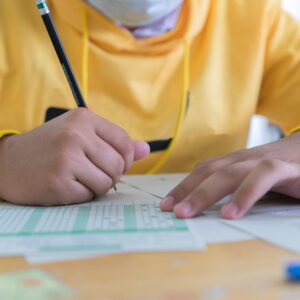 Students experienced the largest math score declines on record in the latest round of education assessment tests released Monday. The results are a reminder of the devastating impact of COVID-inspired classroom lockdowns, which teachers unions and many of their Democratic allies pushed for and which angry parents say were extended much longer than necessary.

In the new National Assessment of Educational Progress (NAEP) Nation’s Report Card, eighth-grade students’ math scores dropped eight points from 2019 to 2022, down to their 2003 levels. Only a quarter of eighth graders were proficient at math, down from a third before the pandemic.

There was a five-point drop in math scores for fourth graders, down to their lowest level since 2005.

“Our nation has lost its way regarding education and this is confirmed by the just released NAEP scores,” said state Rep. Glenn Cordelli (R-Tuftonboro) who serves on the House Education Committee. “We are failing our future.”

In New Hampshire, eighth-grade math scores fell eight points and reading scores fell five points. Among fourth graders, it was a six-point math loss, but just one point in reading.

New Hampshire Education Commissioner Frank Edelblut noted Monday that Granite State students still outperform the national average — one of only four states that scored above the national average in both subjects for both grade levels. However, he acknowledged the results are a major setback.

“While we expected declines as a result of missed learning from the pandemic, we also know that more work needs to be done and more steps need to be taken to ensure students are set up for future success. It is our hope that understanding how difficult the past few years have been on students, we continue to provide them with every support available to close equity gaps, accelerate learning and not only recover, but aim higher,” Edelblut said.

The NAEP results are the latest data point in a growing body of evidence showing the lockdowns demanded by teachers unions and some political leaders were far more devastating than parents were told at the time.

In 2020, Democrats campaigned against what they described as the Republican rush to re-open schools, running ads attacking President Donald Trump for pressuring schools to reopen classrooms. Trump was “ignoring how the virus spreads, risking teachers’ and parents’ lives, going against the advice of experts,” Biden backers said.

In February 2021, the American Federation of Teachers was allowed by the Biden administration to pressure the CDC into amending its back-to-school guidance, raising the bar for reopening classrooms in ways not related to the available science.

Some of the same officials who were reluctant to allow classrooms to reopen before are bemoaning the impact of remote learning on school children now.

“I want to be very clear: The results in today’s nation’s report card are appalling and unacceptable,” Biden’s Secretary of Education Miguel Cardona said Monday.

In New Hampshire, the NEA-NH spent the fall of 2020 and winter of 2021 opposing efforts by Gov. Chris Sununu to get students back into classrooms. NEA-NH President Megan Tuttle went so far as to say teachers were “first responders” who should be vaccinated before elderly and at-risk Granite Staters because they sometimes deal with children’s minor cuts and scrapes in the classroom.

And Democrats like Sununu’s opponent in the governor’s race, state Sen. Tom Sherman, proposed legislation mandating COVID-19 vaccines for all students, regardless of age. Critics say it would have been yet another barrier to getting kids back into class, particularly among communities of color where vaccination rates have been lower than the national average.

Sherman also sided with teachers unions in their opposition to Sununu’s reopening policy that allowed local school districts to decide what mitigation efforts to take, or whether to return to in-class instruction.

Research found political views, not scientific results, were more likely to determine if schools reopened classrooms in 2020 and 2021, with schools in Democratic-leaning districts less likely to reopen for classroom instruction.

Parents are now confronting the consequences of those closures. A new Monmouth poll reported parents are more likely to support Republicans than Democrats on the “generic ballot” poll question by a 35-point margin.

“Now is the time for those of us in leadership positions to take a hard look at the data, what we’re seeing on the Nation’s Report Card and on other key measures, and use that to guide our decision making so that all students can overcome the challenges of the moment and access high-quality education,” Edelblut said.