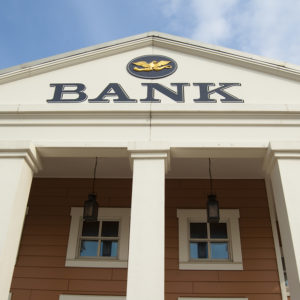 On Monday, Congressional Democrats made it official: They’re abandoning their plan to have the IRS report on personal bank accounts with as little as $600 a year in total transactions. Democrats hoped it would mean another $50 billion a year from American taxpayers.

Instead, the new threshold will be $10,000 in transactions, according to reports, and that number may go higher still.

“I think it’s a step in the right direction, but I don’t think it will help much. It’s still a deeply flawed proposal,” Steve Rosenthal of the Tax Policy Center told the Washington Post. “Even at $10,000, the Biden bank proposal is still too sweeping, throws a net very wide, and it’s hard to see what fish they want to catch here.”

Few economists believe this. The bipartisan Committee for a Responsible Federal Government estimates Biden’s plan “will require nearly $1 trillion of direct borrowing and set the stage for roughly$2.9 trillion of total borrowing over the next decade.”

Meanwhile, though she has posted press releases denouncing puppy mills and celebrating the Currier Museum of Art, Sen. Maggie Hassan has not issued a press release regarding the $600 IRS plan or taken a position on the premise of using the IRS to monitor middle-income earners as a source of Build Back Better revenue. She, and the rest of the delegation, have also repeatedly refused to comment when asked about the issue by NHJournal.

This is just the latest setback for the Democrats’ so-called “human infrastructure” spending plan. On Sunday, Democrat Rep. Chris Pappas published an op-ed accusing progressive backers of the deal of being “more interested in playing to their base or going viral on Twitter than helping solve problems.” He also called them out for “playing games” by blocking a vote on the actual infrastructure bill, which passed the U.S. Senate with bipartisan support but is being held up by Democrats in the House.

Gov. Chris Sununu, who’s considering a run for U.S. Senate next year, had called out the delegation for their silence on the IRS plan to target low-income banking customers. And he’s been relentlessly attacking them over the $3.5 trillion in proposed federal spending.

How will the politics play out?

Seven House Democrats have already announced they’re not running for re-election next year, more evidence Democrats in Congress believe their party will lose control of the House in the 2020 midterms. Progressives argue the massive spending plan is needed to motivate their base. Traditional Democrats fear extreme action will inspire GOP turnout and scare moderate voters to stay home on Election Day.

Sens. Jeanne Shaheen and Maggie Hassan are among the 48 Senate Democrats Majority Leader Schumer says are on board with the social spending surge and the tax hikes to pay for it.