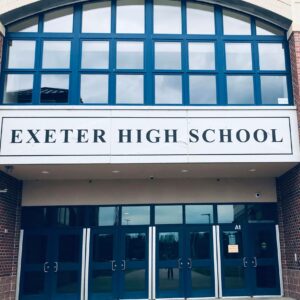 An Exeter High School freshman, who is also a practicing Catholic, was suspended from school sports after he affirmed the Catholic Church’s teachings on gender during a private conversation with another student.

Now the teen, identified in court records as M.P., and his family are suing the district for violating his rights. M.P. is represented by Cornerstone attorney Ian Huyett.

According to a Cornerstone statement, M.P. did nothing except express his constitutionally protected views. “M. P. did not harass or demean any student, but simply expressed his views on a contentious cultural issue.”

Exeter Region Cooperative School Board Chair Helen Joyce did not respond to a request for comment. The lawsuit is filed in Rockingham Superior Court.

Cornerstone is a Christian advocacy non-profit based in Manchester and founded by conservative politician and activist Karen Testerman. According to Cornerstone, M.P. did not target or bully any transgender student with his speech. Instead, he was punished by Assistant Principal Marcy Dovholuk after he had a private conversation with another student.

M.P. had an exchange with a progressive student, who is described as not being transgendered, on a school bus. During the conversation, M.P. relayed his belief informed by Catholic teaching that there are two genders, male and female. This exchange was followed by a conversation between the two students over a text messaging app. That’s when the progressive student then got Dovholuk involved.

“The student then turned a copy of this text conversation over to Vice Principal Dovholuk, who confronted M. P. with printed copies of the text messages. M. P. was then subject to an athletic suspension,” according to the complaint.

Dovholuk suspended M.P. from athletics because of this conversation, which happened outside the school building, Cornerstone said.

Exeter parents are already wary of the district’s handling of controversial issues and what many parents believe is an ideological bias among its leadership.

Exeter’s SAU 16 was put on notice by the state last month when the New Hampshire Attorney General’s Office and the office of the Commissioner for New Hampshire’s Department of Education published a joint report on several concerns at the school, involving the violation of student rights.

The report found, among other issues, that the school violated students’ rights during the prom when school staff put marks on the hands of students to indicate their vaccination status.

And the district’s Director of Diversity, Equity, Inclusion, and Justice, Andres Mejia, is part of the leadership team of the Black Lives Matter Seacoast organization.

Asked if, given his open ideological advocacy for BLM, he would work on behalf of religious and conservative students, as much as he works for minority and LGBTQ students, Mejia insisted it would not be a problem.

“My role is working for all students,” Mejia said. “And conservative children are part of that.”

The complaint alleges the district is violating M.P. ‘s rights under Article 22 of the New Hampshire Bill of Rights which protects his right to free speech. The suit also argues the school had no legal ability to punish M. P. for the content of his off-campus text messages.

As many other districts in New Hampshire have adopted similar policies to those in Exeter, M.P. ‘s case could have wide-ranging impacts throughout the Granite State.

“The key question before the court will be if Exeter’s Gender Nonconforming Students policy, nearly identical to the policy adopted by school districts across the state, can be used to suppress the free speech rights of students who hold dissenting views,” Cornerstone said in a statement.