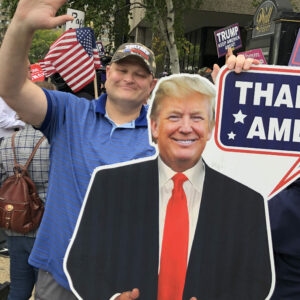 A Trump supporter rallies in Manchester, N.H. in October, 2019.
News

A majority of New Hampshire Republicans will back President Donald Trump in the 2024 primary if he chooses to run again, according to a new NHJournal poll released Sunday. If Trump opts out, his son Don, Jr. is near the top of the First in the Nation primary pack.

And a similar number say they’d be more likely to back any Republican POTUS candidate who picks Gov. Chris Sununu as their running mate.

The poll of 624 registered Republicans found 56 percent would support President Trump to once again top the GOP ticket in 2024, with the rest of the field in single digits. Without Trump in the race, Vice President Mike Pence tops the rankings at 24.5 percent, followed by Donald Trump, Jr. (13.6 percent), former UN Ambassador Nikki Haley (11.7) and Texas Senator Ted Cruz (10.4)

Given Trump’s sky-high polling among Republican voters — he has an 88 percent approval rating among the GOP in the latest UNH Survey Center sample — this 56 percent number isn’t surprising.

“Like him or not, Donald Trump remains the single most significant force in American politics, more so now as he prepares to leave office than he was as president,” says GOP consultant Patrick Griffin. “His will be the most unconventional — and likely most high profile — post-presidency in American history. His ability to critique and confound Joe Biden will be formidable and frustrating.”

As for his potential role in presidential politics four years from now, “Trump puts a deep freeze on any ambitious Republican considering a 2024 run. His power and influence cannot be underestimated,” Griffin said.

“I would hesitate to draw anything meaningful from these numbers. It would not surprise me if the eventual winner of the ‘24 primary is not even included in these choices. Does Trump still hold his block of voters? Sure he does. But will that be a plus or a minus in 2024?  No one knows.”

They both agree, however, that Chris Sununu is a force to be reckoned with.

“Chris Sununu has a strong record as governor and a narrative that will play well with the party’s base as well as providing strong appeal to independent voters in a national general election. He will likely wind up on the shortlist of any GOP presidential nominee,” Griffin said.

“Chris Sununu would be an enormous help to the Republican ticket in 2024, whether he was the candidate for Veep — or for POTUS,”  Rath said.

The poll was conducted for NHJournal by Praecones Analytica and has a margin of error of +/- 3.99 percent.