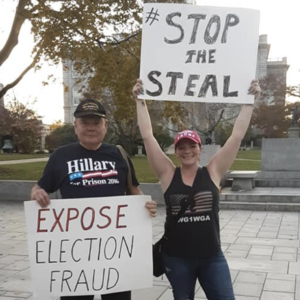 New Hampshire Republicans overwhelmingly believe the results of the 2020 presidential election were illegitimate, but they also want Republicans in Congress to work with the incoming Biden Administration to address the pandemic. That’s according to a new NHJournal poll released Monday.

One of those Republicans is Rep. Fred Doucette, NH co-chair of the Trump 2020 campaign.

“I would agree with the majority in the poll,” he told NHJournal. “There remain too many unanswered questions to call the presidential election legitimate. The American people are entitled to an honest and transparent election and the President is entitled to have this process play out.

“Allowing these recounts and lawsuits to run their course will ensure that all Americans can be confident in the results of the election,” Doucette said.

GOP distrust in the presidential election isn’t exclusive to New Hampshire. A new national Gallup poll released Monday found just 11 percent of Republicans believe the voting process worked “well” or “very well,” while 88 percent say it worked “not too well” or “not well at all.”

A majority of Americans, 55 percent, disagree.

NH Democratic Party Chair Ray Buckley told NHJournal it’s time for the NHGOP to face the facts. “The healing of America post-Trump chaos will be more challenging if Republicans continue to refuse to live in a reality-based world. At some point, they need to shake off the Trump nonsense in order for this country to move into a better future. Otherwise, it will be nearly impossible.”

On the issue of post-election cooperation, Doucette agrees. “Republican members of Congress should absolutely work with the Biden administration to fight COVID. President Trump’s Operation Warp Wpeed and his well-tuned plan is in place and should be followed through with. The final defeat of this pandemic has been laid at the feet of the Biden administration.”

One way to view these seemingly contradictory responses is to view the answer to the first question as a form of political virtue signaling. Trump’s approval among New Hampshire Republicans is high, and 56 percent say they’ll back him in the 2024 primary if he runs again. Echoing Trump’s unproven claims of an illegitimate election is a way to express support for Trump instead of an assertion they actually believe the election was stolen. If they did, why would they want Republicans in Congress to cooperate with an “illegitimate” president?

F0rmer NHGOP Speaker of the House Bill O’Brien, on the other hand, says the skepticism is real and legitimate.

“New Hampshire Republicans are justifiably skeptical of the legitimacy of Vice-president Biden’s claimed success in the November election,” O’Brien says.

“So many other facts speak to widespread, systematic, and demonstrable fraud committed by those who spent the last four years working out their surprise and outrage over President Trump’s 2016 victory by falsely claiming fraud.  It seems they talked themselves into believing there was fraud in 2016 and decided that it would justify their fraud in 2020.”

But, O’Brien adds, “if Vice-president Biden is sworn in as President, of course Republicans in Congress should and will work with his administration to ensure the safety and health of all Americans. The Republican response to what has happened this fall will never be to hold the American people hostage.”

“It shows what has always been true: Granite Staters want their elected officials to cooperate. That’s a lesson the state’s Democrats learned in November. Even with a large portion of Republicans questioning the election results, they still want bipartisan work in the official arena.”

The entire poll with crosstabs can be found here.