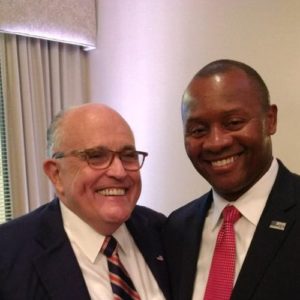 On the eve of a campaign event with fellow Republican Rudy Giuliani in Plymouth, Edwards told NHJournal that there’s no conflict between his view that “character is the most important thing we need in this country,” and his support for President Trump.

“When you’re talking about moral character, I’m not looking towards the President of the United States–this president or any president–to provide moral character for me,” Edwards says. “I’m a faithful person. I go to church for that.”

Edwards also called out Trump’s opponents for what he perceives as their hypocrisy on the character issue.

“I find it very interesting how people, particularly those on the Left, will say ‘Do you think this guy has character?’ All of a sudden now they’re concerned about character? Look at the people they’ve have covered for, look at people they’ve shaded things for. And so what does character really mean?”

As president, Edwards says Trump “is doing a great job. I think it’s been so long since we’ve seen a strong leader that we’re uncomfortable with it. President Trump seems like something from long ago because he’s a strong individual….We have a president who’s willing to take the blows, to stand on the world stage and say ‘There’s nothing wrong with America.'” And, he says, most Granite State Republicans he talks to on the campaign trail agree.

“The vast majority of [New Hampshire GOP primary] voters are very supportive of the president,” Edwards says. “I think he offered a different vision of our country and he didn’t run on the same old rhetoric.  If you were a person who believed in this country, you thought ‘Finally, somebody is willing to say what’s right.'”

Recent polling finds that, while President Trump is relatively unpopular among New Hampshire voters, he still has strong support among the state’s Republicans. And like most Americans, Edwards supports Trump’s handling of the economy.

“Under Trump, people are working. You saw the numbers for the previous quarter growth: Four point one percent, right? This is what happens when you unleash America,” Edwards says.

So would Edwards want Trump to appear at a campaign event for him here in New Hampshire? “Yes.”

And what would Edwards talk about if he were introducing President Trump at a New Hampshire event?

“His patriotism, his strength, his support for the Constitution, American pride. I praise him for really being the spearhead of changing our culture because that to me is the most important policy that we have in this country,” Edwards said.

Edwards is scheduled to appear at a campaign event later today with former NYC mayor and presidential contender Giuliani, who is now part of President Trump’s personal legal team handling the Mueller investigation into the 2016 campaign.