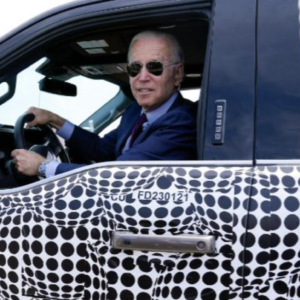 Energy Experts to Biden: You Can’t Go Green Without Getting Serious About Mining

While President Joe Biden was promoting his push for electric vehicles at a Ford plant in Michigan, Congressional Republicans were hosting a forum on the fact that Biden’s own regulations are among the biggest obstacles to America’s green tech future.

Biden appeared next to Ford’s new F-150 Lightning all-electric pick-up truck, the kind of iconic image he wants to use to sell his $174 billion electric vehicle plan that includes building 500,000 charging stations by 2030. The high-end version of the Lightning will cost an estimated $70,000.

If Detroit can even build them.

That was the concern of Republicans on the U.S. House Committee on Natural Resources looking at the minerals necessary to manufacture electric vehicles, windmills, solar panels, battery storage and other high-tech devices and renewable energy technologies. Known as rare earth minerals, these building blocks of green technology are difficult to extract from geological formations, making them costly.

“These minerals need to be mined, and where they’re mined matters a lot,” said Rep. Matt Rosendale (R-MT). “The U.S. has some of the most stringent environmental and labor standards for mining of any nation. Unfortunately, the nation that has a near-monopoly on mining for many of these critical minerals is China.”

The Republican forum took place on the same day as President Joe Biden appeared at a Ford Motor plant in Michigan to promote a $174 billion electric vehicle plan that includes building 500,000 charging stations by 2030. The tour featured Ford’s new F-150 Lightning pickup truck with an electric battery being manufactured in Georgia by the South Korean company, SK Innovation, although Ford recently announced that it expects to start making its own battery cells by 2025.

Biden was spared from having to weigh in on an International Trade Commission dispute between SK Innovation and rival LG, which recently won an intellectual property dispute that could have shut down the Georgia plant. The two companies recently reached a $1.8 billion deal to keep the plant operating, saving about 2,600 jobs.

While that deal expands domestic electric vehicle battery manufacturing, the raw materials to make those batteries must still be exported due to rigorous environmental regulations that have made mining in the U.S. challenging. The Biden administration has not given any sign it plans to review its regulatory regime.

“Pro-mining isn’t anti-environment,” said Laural Sayer, president and CEO of Perpetua Resources, an Idaho company trying to restore an abandoned mine that could produce up to 148 million pounds of antimony, which is needed for infrared technology and munitions. “Mining in Aerica provides us control over our future. Domestic production gives us direct access to the materials we need, brings with it American jobs and American infrastructure, and puts the social and environmental conditions of mining in our hands.”

Sayer told Natural Resources committee members there are currently no domestically mined sources of antimony with China, Russia, and Tajikistan controlling more than 90 percent of global production. She also told the committee that the company spent six years studying the issue before submitting an operations and restoration plan to the U.S. Forest Service in 2016. It is now in the fifth year of required environmental reviews and if, approved, will need up to three years for construction before it starts producing minerals.

Michael Moats, director of the Thomas J. O’Keefe Institute for Sustainable Supply of Strategic Minerals, said during the forum that the number of U.S. refineries for these metals has dramatically decreased over the last 25 years. He provided the committee with data from the U.S. Geological Survey Commodity Summaries showing the domestic aluminum and lead smelters, and copper and zinc refineries have all decreased while China has dramatically increased production.

At the same time, the domestic workforce is incapable of meeting demand.

“Due to lack of investment and low enrollments, many U.S. universities no longer offer degrees in mining and engineering,” Moats said, adding that just one metallurgy institute in China trains 30 doctoral-level students each year.

The lack of domestic production and a capable workforce will make it hard for the Biden administration to meet its climate change goals.

“Any disruption in our supply of these minerals from China will be disastrous, and they can choose to disrupt our supply for any reason or no reason at all,” Rosendale said. ‘’If you believe we should transition to greener energy alternatives, you must support the mining of critical minerals. It’s not possible in good faith to support the former without the latter.”

Following a 2010 incident in which a Chinese fishing vessel working in disputed waters around the Senkaku Islands collided with patrol boats from the Japanese Coast Guard, the two countries engaged in a diplomatic standoff. China was eventually accused of prohibiting rare earth mineral exports to Japan, which it denied.

“The mineral supply chains needed to make global goals a reality either don’t exist or are controlled by unstable nations or geopolitical rivals,” said Rich Nolan, president and CEO of the National Mining Association. “Ensuring the U.S. has the secure, responsible mineral supply chains it needs requires a new commitment to U.S. mining. There’s no getting there – the energy transition, the rebuilding of our infrastructure, and the reshoring of quality, community-supporting jobs – without ensuring that made-in-America begins with mined-in-America.”

VOSE: A Slap in the Face to N.H. Ratepayers Read More