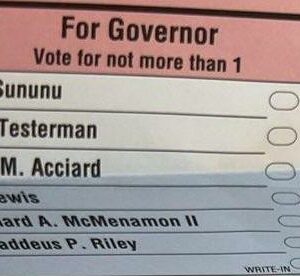 On the eve of the primary election came reports out of Windham that ballots are being folded with the crease going through the voting oval, apparently repeating the same errors that led to an extensive audit of the town’s ballot system after the 2020 election.

According to reports, absentee ballots sent to Windham voters ahead of Tuesday’s primary have been folded twice, with the creases going through the ovals. The same improper folds on absentee ballots in 2020 resulted in anomalous results and new state oversight of the vote.

Windham Town Clerk Nicole Merrill could not be reached for comment Tuesday. Town Hall staff said she was away at Windham High School setting up for the election.

“There will be an election monitor at the Windham polling place tomorrow. If there are any problems with improper folds or other issues, they will act accordingly,” Fay said.

Windham is one of three communities that will have state monitors in place to oversee the primary election due to multiple errors found in the 2020 voting process.

Windham, Bedford and Ward 6 in Laconia will all have election monitors in place In Windham, the audit found the vote total discrepancy was due to the improper folds. The folds in the paper ballots made it difficult for optical scan vote counters, AccuVote machines, to record the votes properly.

A state review also faulted local officials for compounding the errors by cutting corners, according to a January letter from New Hampshire Attorney General John Formella and Secretary of State William Gardner to Windham town officials.

“(S)imply out, town election officials cut corners. Some of those shortcuts created errors — such as using an uncalibrated folding machine — which were unintentional and perhaps unforeseeable, but ultimately resulted in ballots not being accurately counted,” the letter states.

The state ended up paying at least $123,000 for the outside experts to audit Windham’s voting totals.

In Bedford, a months-long controversy over 190 ballots that were never counted resulted in the Secretary of State deciding the town will have a state-appointed official to oversee the September primary.

“As a result of the concerns and shortcomings described in this and our prior correspondences, the Attorney General makes a finding that the November 2020 General Election returns from Bedford had significant deficiencies,” Myles Matteson of the state Attorney General’s Election Law Unit wrote to Bedford town officials.

In Laconia, a joint investigation conducted by the Attorney General’s Office and the New Hampshire Secretary of State’s Office found that 179 ballots went uncounted after the 2020 general election. The errors in this case were blamed on Ward 6 moderator Tony Felch.

“The ballots in the side compartment were not counted because Laconia Ward 6 Moderator Felch did not understand the basic functions of the ballot collection box,” according to the Attorney General’s release on the matter.

Felch was forced to resign from his volunteer position as part of the resolution of the incident.