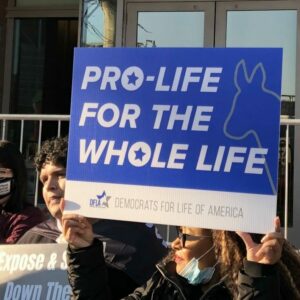 The state legislature passed the Fetal Life Protection Act (FLPA) last year which generally prohibits late-term (24 weeks or later) abortions.  In this year’s session, legislators who support abortion on demand at any time have introduced several bills that would effectively gut the FLPA. One such bill is HB 1609.  However, last week the House Finance Committee approved an amendment to HB 1609 (amendment 2022-1209h) that addresses certain legitimate concerns with the FLPA while preserving its core provisions. We urge the full House and Senate to support the amendment and pass HB 1609 as amended.

The passage of the FLPA unleashed a wide range of emotions and opinions. Pro-life citizens of the state for the first time in the nearly 50 years since the Roe v. Wade decision were heard, and the preborn after 24-weeks of gestation were recognized as having the right to life. Although numerous surveys have shown the public supports restricting late-term abortions to circumstances where there is a compelling reason for performing the procedure, some pro-choice extremists who could not stomach any restrictions at all on abortions, backed by the financially well-heeled Planned Parenthood, responded with criticisms that ranged from understandable concerns to inaccurate descriptions of what was done.

For historical context, as far back as 1958 in Bennett v. Hymers, New Hampshire’s courts recognized that, even before birth, a fetus is a separate entity from the mother with distinct legal interests. Roe v. Wade stated in a little cited passage that “the State in promoting its interest in the potentiality of human life may, if it chooses, regulate, and even proscribe, abortion.” Twenty years later in Planned Parenthood v. Casey, the Court again recognized “the State’s power to restrict abortions after fetal viability.”  Healthcare has evolved dramatically since Roe said in 1973 that “Viability is usually placed at about seven months (28 weeks) but may occur earlier, even at 24 weeks.”  Today, medical professionals generally agree that in most cases a fetus can live outside the womb at less than 24 weeks of gestational age. Yet New Hampshire never responded to the court’s invitation to protect life until last June.  It’s important that this long-awaited progress be protected.

Those who oppose the FLPA have generally advanced five criticisms of its provisions. We believe that two them are legitimate, and they have been remedied by amendment 2022-1209h. In our view, the other three criticisms are not valid, and they are not addressed by the amendment.

We address the invalid criticisms first.  The first of these is that, although the current FPLA has an exception to the 24 week ban on abortion for cases where the pregnancy endangers the mother’s life, it contains no exception where the mother’s health is jeopardized. That contention is simply not accurate.  The current FLPA contains an exception to the 24 week ban for cases of medical emergency, and the statute defines “medical emergency” to include situations where “continuation of the pregnancy will create a serious risk of substantial and irreversible impairment of a major bodily function.” Although this exception does require that the medical condition pose a serious risk to the woman’s health, it does not require that the condition be fatal.

This language has not been legally challenged in the nine months since the FLPA became New Hampshire law. Contrast that with the case of Ayotte v Planned Parenthood where the lawsuit began immediately upon passage of the law. Without the amendment, however, HB1609 would effectively gut the FLPA by enacting a broad and undefined “health” exception that would permit a late term abortion to be performed for even a minor physical or mental, or emotional health impact resulting from pregnancy. Without the amendment, the language in HB1609 also watered down the abortion reporting requirements in current law, making it more difficult for a future legislature and the public to know the effect of our efforts to extend protection from late-term abortions.  We eliminated the change in reporting.

Second, critics of the FLPA complain it does not have an exception for cases involving rape or incest.  The short answer to this complaint is that there is no need for such an exception. Under the FLPA, a woman who has been impregnated as the result of rape or incest has 24 weeks (approximately six months) to make an uninhibited decision as to whether to terminate her pregnancy.  That time period is entirely reasonable.

Now we turn to the two legitimate concerns addressed by the amendment. The amendment allows a 24 week or later abortion in scenarios involving “fetal abnormalities incompatible with life.” This represents good healthcare policy. The legislature should not put our hand too firmly on the shoulder of the mother and her physician when confronted with a rare case when testing didn’t reveal an abnormality that essentially has certitude that the baby will not survive. This does not allow for an abortion of convenience where Down’s Syndrome or other disabilities are discovered in the final trimester. It’s true that many obstetricians believe delivering the baby early is typically safer for the mother than undergoing a late-term abortion would be. However, the practice of medicine rests on the legally binding Informed Consent process between patients and their providers. During hearings, we were given one such example of a mother carrying twins when one of them is failing and very likely to die before term.  Consequently, the other twin’s health and viability are threatened. It becomes a bit like Solomon’s choice, should the healthy child have her life disadvantaged by being carried with her sibling? Those types of decisions are intensely personal and the state should excuse itself from the exam room.

The second aspect of the amendment is a clarification of the existing law. This is done to put an end to the abuse of facts we’ve witnessed over gross, material misrepresentations of when an obstetric ultrasound is required. Opponents have created grotesque images by physically waving around a transvaginal transducer while alluding to a form of rape on the patient. This political theater was created from thin air.

It’s our hope that the legislature this Thursday accepts our belief that HB1609 as amended by 2022-1209h is good public policy and in accepting the amendment, acknowledges that we passed a good law last year that we’re making just a little better.

Rep. Robert Lynn was first elected in 2020 after serving as the 36th Chief Justice of the New Hampshire Supreme Court. He now serves as a member of the N.H. House Finance Committee. He wrote this for NHJournal.com.