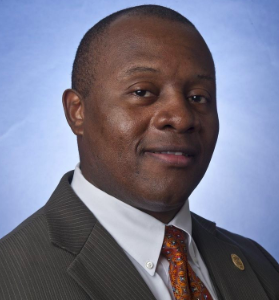 Edwards Campaign Skips Debate, Says NH GOP Has “No Interest in Letting Eddie on the Stage”

Just hours before the NHGOP debate in Manchester, NH, the Edwards for Congress campaign issued two statements confirming that Eddie Edwards is still declining to participate. According to the campaign’s consultant, Michael Biundo, the problem is the state party.

“It is apparent to me that the New Hampshire Republican Party has no interest at this time in letting Eddie on the stage,” Biundo said in a statement.

“To be clear, Eddie has debated in the past, he will debate in the future, and he was more than willing to debate tonight. The only stipulation he has is with the New Hampshire Republican Party’s rules that call for his blind support of scandal-ridden Senator Andy Sanborn. While I have no doubt that Eddie will be the Republican nominee in September, he would have been more than willing to sign a document promising not to endorse against the Republican nominee or launch any sort of third party opposition. We have offered to amend and sign the rules to reflect that, but it is apparent to me that the New Hampshire Republican Party has no interest at this time in letting Eddie on the stage.”

The campaign also released a statement and video from the candidate himself:

“In order to participate in this evening’s debate, the New Hampshire GOP wants me to sign a pledge to publicly support the party’s nominee. My disagreement is that one of the contenders, Senator Sanborn, has conducted himself in a way that makes it impossible for me to support him publicly.

“I want to thank everyone who reached out to give me support and encouragement on my decision to stand up for my principles. I started this race in April of 2017 talking about integrity, and that’s what I’ve tried to bring to this race every day. I firmly believe that if you can’t trust me on the little things, how can you trust me to go to Washington DC to stand up for what I believe in against the pressures of the party bosses?

“This has never been about political grandstanding – instead it’s about standing on principle. Senator Sanborn has been accused of behavior in the Legislature relating to interns and staff that I wouldn’t subject my children to. Sanborn has attacked my service to our country and community. In doing so, he’s disrespected all first responders and military veterans who have served in uniform.

“While I pledge to support the Republican Party, Senator Sanborn’s behavior makes it impossible for me to publicly support his candidacy. I put my name on the Republican ballot to stand up for Republican principles and that’s exactly what I plan on doing as your Congressman.”