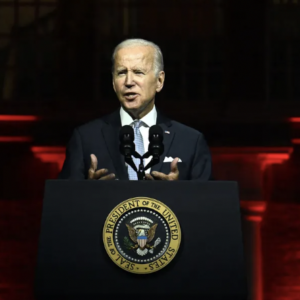 EDWARDS: A Message To My Fellow ‘Enemies of the State’

I think we need to better understand the president’s attack on “MAGA Republicans.” The Democrats have nothing to run on. They won in 2020 by having the media relentlessly attacking Trump for four years using Saul Alinsky’s twelfth of 12 Rules for Radicals. I quote a summary:

“RULE 12: Pick the target, freeze it, personalize it, and polarize it.”

Cut off the support network and isolate the target from sympathy. Go after people and not institutions; people hurt faster than institutions. (This is cruel but very effective. Direct, personalized criticism and ridicule works.)”

The goal of the left is to avoid a discussion. Let’s have one anyway.

There are at least three aspects of Trump.

First, there is Trump and his personality. His approach led to him building a lot of high-end property all around the world from his base and background living in a corrupt New York City where graft and favors were essential to getting deals done. He was a successful television personality. He leveraged that into a successful presidential run despite the FBI knowingly violating FISA warrants authorized by the Patriot Act.

Personally, I couldn’t watch his show. While I could appreciate that he was popular, I’ve never been comfortable with his outsized brashness. It takes little to separate me from “Trump, the Personality”.

But there is more. Trump leveraged the Taxed Enough Already (TEA) Party that really caught fire under Obama. It was a huge movement that was such a threat to the establishment that Harry Reid and John McCain found common ground in encouraging Lois Lerner to abuse IRS power to keep it from gaining institutional footing. The power was held in check and the individuals moved by the TEA Party faded back into living their American lives in relative isolation.

Trump gave voice and leadership to the millions that Hillary Clinton referred to as “deplorables.” The political establishment, most directly the national Democrat power structure, wants to keep stomping out the fire in the bellies of people who just want their nation to be great and not an also-ran on the world stage. There is no mistake, the continuing attacks on Trump and his supporters are meant to disperse and weaken their impact on American politics. It’s a form of voter suppression, not one the media will ever recognize. I will not allow progressives to separate me from “Trump, the Leader for American Greatness.”

And then there are the details.

Republicans can look at Trump’s policies and see the best implementation of the conservative Republican agenda in our lifetime. He was securing the borders, highlighting the political class sell-out to China, and pushing back on the Chinese destruction of young lives with massive fentanyl importation. Under Trump, Russia was held in check. Obama gave up Crimea. Biden signaled the U.S. would tolerate a “minor” invasion of Ukraine, but Trump pressured Russia limiting its influence in Europe due to its continental energy dominance.

I will not allow progressives to separate me from “Trump, the Policy Leader.”

I encourage all to reject the nihilistic and dystopian attacks on the American public using “Trump” as their foil. They’ve picked their target. They are isolating him. They have polarized him all as a smoke screen for their real purpose. Destroy the TEA Party movement and end the hope of policies that will return the U.S. to greatness.

Know what you know. Know what is said that is nothing more than dangerous rhetoric beneath the dignity of the Chief Executive and a great nation. Stand strong. Get involved. Vote in November.