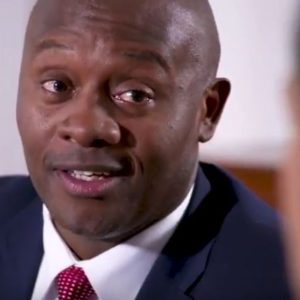 Eddie Edwards Needs to Debate or Drop Out

Thursday night is the NH GOP’s one official debate in the First Congressional District, and Republican Eddie Edwards has announced he’s not showing up.  If he doesn’t, then he needs to drop out of the race.

The issue isn’t just debate-dodging, though that’s important. A candidate who won’t debate is a candidate unfit to serve.  It’s the reason he’s giving for not showing up.

Eddie claims that he wants to debate, but he can’t because NHGOP rules require him to pledge to support the party’s nominee–win or lose. Edwards says his high standards of character and integrity won’t allow him to endorse his opponent, State Sen. Andy Sanborn, because “I am running to bring honesty and integrity back to Congress.”  And he just cannot “promise to publicly support Sen. Andy Sanborn if he were to win our primary.”

So here we have a Republican candidate announcing in advance that he has no plans to back the Republican nominee in November… unless it’s him.  Otherwise, he’ll, what–vote for Levi Sanders?

Then there’s the fact that Eddie Edwards,  who says his personal integrity won’t allow him to support Sen. Sanborn, has proudly and publicly endorsed Donald Trump.

What’s the real story here?  Does Edwards believe the party owes him the nomination?

For weeks the Edwards campaign has been telling any reporter who will listen that Sanborn should drop out of the race. There are unnamed allegations of some rumored bad behavior or other, and so Sanborn should just quit. Once again, this is not how elections work.

Eddie, if you really think Sanborn is a bad candidate, fine.—Then beat him.

If there’s something in Sanborn’s record the voters need to know, OK—tell them.

Yes, that’s harder work than just having your opponents drop out so you can be carried into the U.S. Capitol on the shoulders of your adoring fans.  Does Edwards realize that is never going to happen?

Even if Republicans cleared the field for him without so much as a debate, there are 11 Democrats battling for their party’s nomination in the First CD.  When they’re done, the last one standing will turn his or her sights on the Republican.  And with potential control of the House of Representatives hanging in the balance, it won’t be a “hugs and kisses” campaign.

The GOP primary has been a mild-mannered affair thus far.  Not a single negative ad has aired.  If this race is too tough for Eddie Edward’s delicate sensibilities, what’s he going to do when Democrats launch the “GOP = Trump = Hitler” attack ads in October?

Here’s the cold, hard truth about 2018: Nobody cares about races like Edwards vs. Sanborn. Polls consistently show that the only race voters care about is Pelosi vs. Trump.  GOP primary voters just want to help Trump, and they don’t care if the best candidate to do that is Edwards or Sanborn or Hannibal Lector. It’s all about getting Trump’s back. That means denying Democrats every congressional seat they can.

In Hew Hampshire, with Trump under water by 13 points, that won’t be easy.  The GOP needs a strong candidate and a united party. Edwards’ position— “I’m not gonna debate and I won’t support my opponent” —fails on both counts. It’s a lose-lose for the GOP. It’s also a betrayal of the Republicans who’ve spent the past six months working for the Edwards campaign. They deserve better.

There’s another, non-NHGOP sponsored debate set for Thursday, September 6th. Presumably there’ll be no pledges involved.  If Edwards shows up (at this point, who knows?) and he still hasn’t agreed to back the party’s nominee, that issue–and not their plans for taking on the Democrats–will dominate the entire GOP debate.

Eddie Edwards has a decision to make: Either get serious about the race, attend the GOP debate and endorse the party’s nominee; or drop out and slip away so he doesn’t become a campaign asset for the Democrats after the primary.

Up or out, Eddie. Either on the stage, or out the door. It’s up to you.